When I was a kid, my dad had a compost pile.

Seems to me he didn’t really turn it, nor did it seem like he did much to control the amounts of carbon and nitrogen in there, though I do remember him driving around our neighbourhood after dark in the fall picking up bags of leaves that people had left at the ends of their driveways for city collection. He must have been doing some mixing from time to time, but seems like the pile mostly took care of itself.

Even in those days, my dad was a bit of an old-school anomaly. He spent some years in farm country as a boy, so even though he also lived many childhood years in the city, the idea of composting stayed with him. Of course it didn’t hurt that he and my mom had many mouths to feed, which led my dad to keep a pretty extensive vegetable garden. That garden needed all the nourishment it could get in order to sustain his hungry boys through their growing years, and he fed it our compost.

I’ve often wondered how we as a society have gotten so far removed from such a natural process as composting. I always knew it had something to do with a culture of excess and wastefulness, our obsession with aseptically ‘clean’ environments, and the rise of the suburbs. I was pretty sure there was an awful lot of marketing involved and plenty of chemical fertilizers that could be purchased. There must have been something more ‘civilized’ and ‘advanced’ that we could use on our gardens than that dirty old compost that nature made.

And all this must still be true. But I realize now that the single most powerful factor involved in our disassociation from such a natural process as composting may be that we no longer grow our own food.

We are so out of touch with what the soil needs in order to grow food and sustain us that almost none of us could do it to save our lives. We have depended on the factory farm model for decades now, and the trend continues almost unabated, as smaller independent farms continue to be swallowed up by conglomerates. These massive factory operations not only prefer to plant genetically modified crops and douse them in pesticides, they also rely on chemical fertilizers to increase their yields, which is rapidly depleting the soil.

And we’ve come to rely on them. We are so far removed from the order and processes of our natural environment that these chemical-laden and genetically altered crops are considered ‘conventional’. Agriculture has been practiced by humankind for well over 10,000 years, and intentional composting has been documented at least as far back as 5000 years ago. All the while and many thousands of years before humans figured out how to make compost or grow food, compost was happening all on its own through regular decomposition, as it built and enriched the soil for new food to grow.

Chemical fertilizers have only been in widespread use over the past 100 years. And somehow the food grown with it has come to be considered ‘conventional’. It sounds more like a validation than an indictment; like calling the Tar-Sands the ‘Oil-Sands’. And it makes ‘organic’ food sound like it is strange and new.

Having become so dependent on factory farms and the chemicals that fuel them, we’ve trusted that the owners will manage the soil properly so that it can continue to produce enough food to keep us all alive and thriving. The only problem is that they haven’t, and the agricultural soil that we depend on so much for our survival is quickly being depleted, which means it is losing its ability to sustain us. Fertilizers feed plants, and compost feeds the soil, which is necessary in order to keep growing the same number of plants year after year. 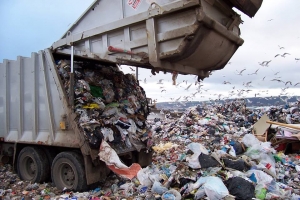 But somehow, amidst a fledgling culture of excess, an obsession over cleanliness, the rise of the suburbs and increased urbanization, we stopped putting our food waste into piles to make compost and started putting it in the garbage with all the trash our exciting new consumer culture was happy to make. All we had to do then was just put it out at the side of the road.

This of course has been going on for some time now. Putting food waste in the garbage not only means that it can’t be turned into compost – used to feed the soil and grow new food – but it also creates another huge problem.

When food waste is sent to landfill it is layered with all kinds of garbage, and breaks down without oxygen. This causes it to create and release large amounts of methane, a greenhouse gas that is 25 times more potent than CO2 and contributes enormously to climate change.

Recent studies have concluded that more than 40% of the food grown on our planet is thrown out before it can be eaten. This is a trend that cannot continue if we are to live sustainably and survive as a species. We certainly cannot be taking nutrients from the earth, growing food with them, and then just toss them in with a bunch of junk where they release gases that create climate change and make it harder to grow food. That just won’t work. 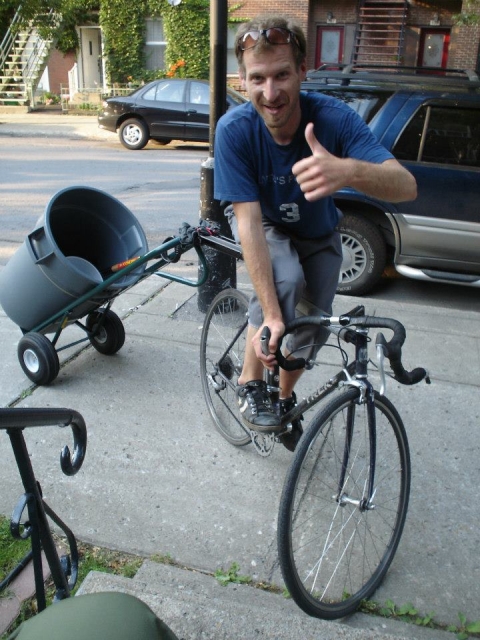 In the summer of 2007, I got tired of putting my food waste in the garbage, and decided to start turning it into compost the way my dad taught me. I got a bike trailer and started picking up food waste from my neighbours too. I called the service Compost Montreal.

Compost Montreal has blossomed from a bicycle and trailer collection into a dedicated team of 15 people serving nearly 750 residents and 100 businesses and institutions such as schools, restaurants, and cafés.

Montreal still has no city-wide organic waste collection program, and nowhere near enough processing capacity to divert the food waste it generates from landfill. The city’s official plan was to divert 60% of its organic waste by 2008. As of 2014, the diversion rate hovers at just over 10%. Compost Montreal is the only access that many Montrealers have to composting, as the official plan for a city-wide residential collection is not expected to take effect before 2019.

Many of our clients are as passionate as we are about reducing the environmental impact of the waste they produce. Together, we divert around 700 tonnes of organic waste from landfills every year, reducing greenhouse gas emissions by about 1,750,000 tonnes of CO2 equivalent annually. That’s about the same impact as taking 900 cars off the road!

While attempts are still being made to keep the site open, the threat of closure is still very real, and the site could now close at any moment. There are no other compost sites near the city of Montreal, so this situation has put our project in serious jeopardy.

Back in July, it looked as though Compost Montreal might not make it through the summer. But thanks to the support we’ve received from thousands of citizens who believe in the importance of composting and refused to see the only active compost site in Montreal shut down, we’re still here, and still composting. Through all of this, our friends at Valhalla have been a huge source of support for us. Not only do they believe in the mission of Compost Montreal, and are helping us to get word out to develop more support for our project, but most importantly, these folks understand compost.

Because permaculture is so key to their values and their approach to the land on which they are building their community, Valhalla knows what the soil needs and how to nurture it. They have welcomed the idea of creating a compost site on their land, which would not only help Compost Montreal and the people who depend on our service, but it also shows the kind of harmonious, holistic, and enlightened thinking that is making Valhalla such a force in this world. They know the way it makes sense to live, both with people and with the planet, and they are on a quest to live that reality in everything they do.

They truly walk the walk, and we are very blessed to know and work with them.

Back in the summertime, they helped us to, as Marc said at that time, ‘get the heart of Compost Montreal beating again’. They helped inspire us to launch a crowdfunding campaign in order to help raise the funds we would need to build a new compost site and keep composting, no matter what may come. It has been an emotional past few months and quite a process to get our campaign ready to go, but we have now launched and we are excited to move forward.

You can join with us by visiting our campaign on Indiegogo at www.igg.me/at/compostmontreal.

1 thought on “#Growing The Future”