Super foods. They seem to be trending. So much about consuming these preciously nutritious products as part of our daily diets. Acai berries, quinoa, chia seeds, matcha, hemp seeds, raw cacao… It’s great that we are becoming more aware of the role good nutrition plays in our lives and that the accessibility of highly nutritious food is slowly improving. All great things for society! But sometimes I feel like the super food trend is kind of unnecessarily prestigious. Why? Here’s a little secret: you do not need to import super foods, you don’t even need to grow them. Simply go outside and take a look around. They are everywhere, growing humbly to their own terms, waiting to be noticed… 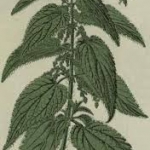 is not just a super food, it’s a super plant. A common ‘weed’ that is found growing in the Americas, Asia and Europe,  nettle is known for being the best blood purifying tonic in the plant kingdom.  It presents itself in shady, moist soils and waste places. I’ve seen it growing in the edges of woods and even in alley ways in the city. Little did you know that this ‘weed’ happens to be legendary in cultures all around the world for it’s medicinal properties, incredible food resource, for natural dyes, fiber for clothes, rope and paper, and it is also instrumental to biodynamic farming and phytoremediation (clean up) of some heavy metals in contaminated soils.

It was known as green gold… 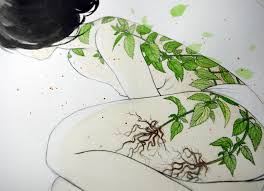 Nettle is one of the nine herbs mentioned in an Anglo-Saxon charm recorded in a 10th century manuscript called The Lanunga. The charm is intended to be an antidote to poison and to heal infection.

Nettle is incredibly mineral rich, it is a plant that goes way back into our ancestry. In Europe,  people ate the young shoots of the nettle plant for a revitalizing springtime tonic when there wasn’t much else around to eat. They also made infusions to assist milk production of pregnant and lactating women and livestock. They also used the leaves to create green, black, and yellow dyes from in times of war and they would use those dyes to help camouflage themselves. 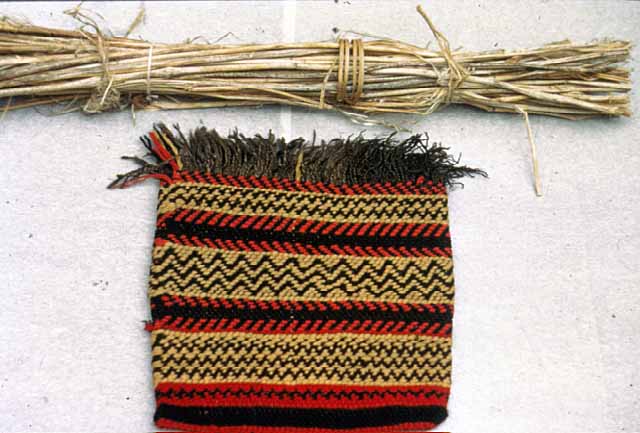 Nettle Fiber! Yes, it’s true. Nettle was once widely used for its stem fibers which were ratted and spun like flax. Nettle fiber is said to be as strong as hemp and as soft as cotton. In Denmark, nettle cloth has been found in burial mounds dating back 5000 years or more. Native Americans used nettle fiber for making fishing nets and for cordage. They held it in high esteem, calling upon it regularly, and they knew it as green gold. 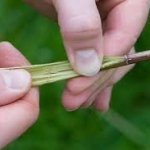 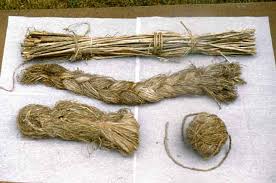 Last year I did try making nettle rope with a friend, it worked and it wasn’t too difficult. Turned it into a hemp style necklace for a friend. I basically dried out the stalks, separated the fiber from the core of the stalk, and began twisting the single fiber strands together. I twirled two pieces of fiber together, holding them from both ends and twisting in opposite directions, until they were utterly intertwined. Repeated the same process. Then I took the two binded strings and binded those together. Keep repeating this process of twisting together fibers and adding them together until you get to the thickness of string/rope desired.

Stinging nettle is a perennial plant which is armed with stinging hairs all over its leaves and stem. The leaves are mostly oval, bases are kind of heart-shaped.  The branches are clustered and the greenish golden flowers bloom in June-September. Watch out if you are propagating nettle your garden, they spread like crazy and prefer not to be in pots, so place them well! 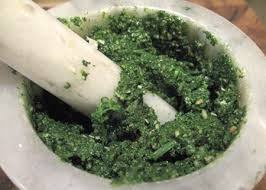 There are SO MANY medicinal uses for this one plant that I am unsure where to begin to reveal it’s magic. Regular consumption of nettle, based on my own observations,  seems to excel in lowering toxicity levels in the blood, at soothing the nervous system, mood balancing, acts as an aches and pains killer, increases levels of energy drastically, increases focus and concentration, and increases sex drive. It’s benefits extend not just to people, but enriches animals and the SOIL as well :).

Nettle is renowned for it’s ability to restore adrenal functioning and offer generous relief from symptoms of hay fever.

When you get stung by nettle what is happening is that the hairs of the plant break off in the skin when touched, and it injects a cocktail of chemicals into the skin, including histamine, and others which cause a painful irritation. a.k.a. will cause allergic type reactions on your skin. However as soon as you transform the plant, either by drying, steaming, cooking, freezing, or infusing the leaves, the plant actually begins to work as an anti-histamine.  I tend to get seasonal allergies pretty bad if I am not taking precaution.

So I like to make strong infusions about a few weeks before allergy season starts kicking in. I bring one gallon of water to boil, take it off the heat, add a good hand full of dried nettle leaves, stir it, put a lit on it, and leave for at least 4-8 hours*. Strain it, store it in the fridge where it will store for 3 days. I drink at least one cup a day as part of my daily routine before and during allergy season, and I avoid any symptoms. Other impacts nettle takes on the adrenal glands include creation of life force hormones, regulates metabolism, helps the body deal with stress, and even helps to control blood pressure.

I’ve also heard that in some places, people had nettle plants handy to give themselves the occasional sting to aid with their arthritis or rheumatism. A traditional remedy for these including purposely stinging the affect areas with fresh nettle leaves to relieve pain and inflammation. It’s called Urtication. Its been said that people used to keep a nettle plant in the window sill of the kitchen for this reason. The Hesquiat rubbed fresh nettles over arthritic joints, sore backs and stomach aches. They of course kept them alongside some Plantago Major or Aloe Vera to sooth the skin after using the plant for this kind of treatment. 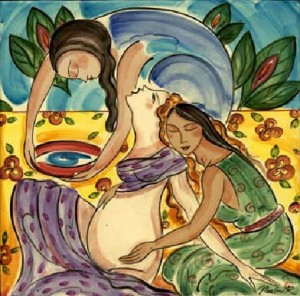 Nettle is also a reputed hemostatic (controls or stops bleeding). Native American called upon nettle to stop uterine bleeding. It’s also a fantastic ally for pregnant or nursing mothers. Women used to drink the infusion and eat the greens during pregnancy to strengthen their fetus and ease the delivery, to help prevent postpartum hemorrhage and improve the quantity and quality of breast milk.

– Relieves symptoms of menopausal women due to nerve soothing effect and calcium rich nourishment which prevents osteoporosis and encourages a healthy heart.

-Regular use of the infusion as a rinse for your hair and skin and you will be left feeling and looking beautiful.

-Alleviates chronic skin conditions such as eczema, hives, or acne with 2-4 cups of infusion daily.

-Can be used to make salves and poultices.

*For most leafy medicines, to maximize the medicinal infusion requires leaving the plants to seep for at least 4-8 hours. You do not need to seep it this long for everything though. I sometimes just seep mine for 20 minutes before I enjoy it, the only compromise with seep time is in the medicinal concentration content. 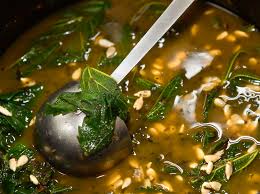 Ah yes, back to the FOOD aspect. At home, my mother and I harvest the nettle leaves and steam them, and eat them as a side dish with some herbs and sesame seeds sprinkled on top. We’ve also cooked the leaves in omelets, lasagnas, nettle soups, nettle dal, juiced nettle, nettle noodles!  You can pretty much place them in any dish that you enjoy greens in. We have also made nettle pesto in the past, blended in with some herbs, and it was really tasty. On a hot summer day, she would make us all iced nettle tea with honey and lemon, helping us regain our energy that was drained from the sun. We’ve also infused nettle into some good olive oil for remedies and to enhance to nutrition of our winter time food.  Cut and dry nettles to add to winter fodder for horses, cattle, goats, pigs and sheep.

What else could you try with it? Cut the stalks to the ground in the autumn, strip off the leaves (place them in compost) and lay flat to dry. Once dried, the stalks can be broken up to retrieve the long fibers for handspinning or shredded to make paper. 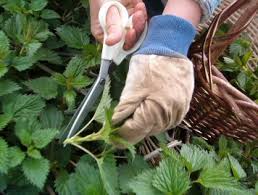 Be careful, because it’s not called stinging nettle for no reason, it can be painful! So most responsible harvesters wear thick gloves, long sleeves and jeans to avoid getting stung. If however you are like me and are on occasion a little slack on these conditions, make sure you’ve got some plantago major or some aloe vera near by to ease the sting. Pluck young nettle leaves in the spring to dry/steam/freeze/conserve. I know many people who maintain some plants by preventing a few plants from flowering. By continuously plucking off the flowering top, the energy of the plant will continue to move into the leaves, thus making them alright to harvest all summer long. Do not harvest or eat leaves in late season that went to flower because they will start to get tough and grainy. The grainy bits are said to cause urinary issues.

If you are harvesting the stock of the nettle plant, you can wait until the first frost comes in the fall, because it well subdue the stinging effect, and make them easier to harvest.

All these functions performed by one single plant. I feel as excited about nettle than i do about hemp. Cheers to the power of fresh and local super plants!

Secrets of the Super Plants,  Ancient Living Knowledge… Green Gold infusion shines deep within our heritage. It was one of my first plant allies in my life which made me realize the significance of all the wild things that grow around. It sparked a desire to start seeing the plants in the forest as individuals instead of one big green mesh. The truth is, there are many wild plants with magical and powerful properties that have become neglected, forgotten by most people… from all kinds for centuries all over the world. This is a contribution to part of the revival of the heritage of humankind– the knowledge of medicinal plants. Knowledge of this kind is too often forgotten or buried away with our true histories, disconnected to the point where a certified doctor looks at you like a nut case for treating yourself with anything but pharmaceuticals. We hope that by shedding some light on some wisdom from the past, we can help revitalize our responsibility to nurture ourselves and our planet. 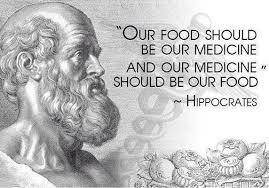