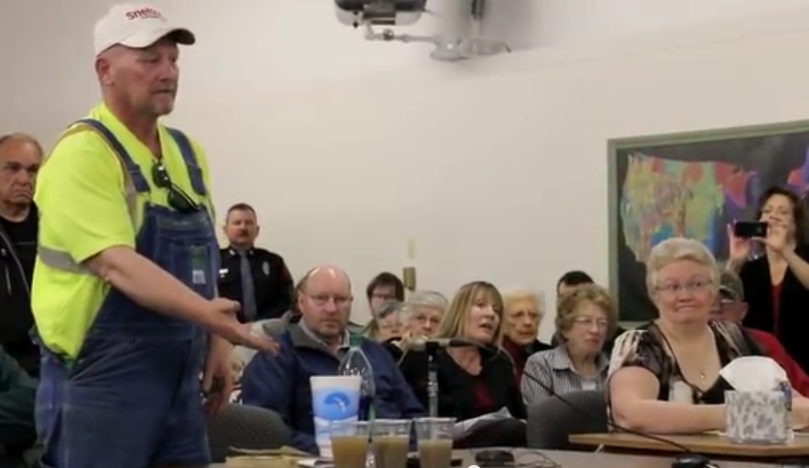 Sometimes all the talk in the world can’t prepare you for cold, hard reality. At a Nebraska Oil & Gas Conservation committee hearing, an oil and gas commission was left in utter silence when a farmer brought in three cups of fracking water and offered each of them to take a sip.

It’s a brilliant visual reminder that what’s at stake when we talk about the dangers of fracking isn’t dollars and cents, but something much simpler: Security in knowing that one of the most basic necessities of life, access to clean drinking water, is safe from harmful pollutants.

Nebraskan James Osborne appeared at the hearing to discuss an oil company’s application to ship out-of-state fracking wastewater into Nebraska to be dumped into a “disposal well” in Sioux County. According to a Fox Business report on the proposal, the waste would be coming from states like Wyoming and Colorado, but dumped in Nebraska because nobody else wants anything to do with it:

The commission heard 2½ hours of public comment Tuesday at its Sidney headquarters before convening a specific hearing on the proposal from Terex Energy Corp. The Broomfield, Colorado-based company wants to truck salty groundwater and chemical-laden fracking wastewater that result from oil searches and production in Wyoming, Colorado and, eventually, Nebraska, to a ranch north of Mitchell, Nebraska. As much as 10,000 barrels a day of the water would be injected into an old oil well on the ranch.

Lest people think Osborne is a bleeding heart tree-hugger, he notes that he’s worked in the oil industry and still even has family who work in fracking. However, his background can’t stand in the way of the troubling facts about what fracking does to the environment, particularly to a farming and livestock intensive state like Nebraska which relies heavily on its water reserves to function.

On a table, Osborne sets down three water cups, filling each with some purified water. There is no question that anyone would feel comfortable drinking that water. But in the event of fracking wastewater leaking into the streams and rivers of Nebraska, residents shouldn’t expect their taps to remain safe. Instead, Osborne dumps in the kind of yellow-brown sludge common in fracking runoff water. This is what the water would look like. The audience gasps.

“So you told me this morning that you would drink this water,” Osborne tells the commission. “So would you drink it? Yes or no?”

The group stares silently at the display. After an awkward pause, one says he won’t answer any questions.

“Oh, you can’t answer any questions? Well my answer would be no. I don’t want this in the water that will travel entirely across this state in three days,” Osborne says. “There is no doubt there will be contamination. There will be spills.”

So far the commission hasn’t made a ruling on the controversial proposal. They chose to delay a ruling to think it over more carefully. In the meantime, environmental group Bold Nebraska has launched a petition to get public support against the fracking dumpsite.

Author: Jameson Parker I cover US politics, social justice issues, and other current events which aren’t getting the attention they deserve. Feel free to follow or drop me a line on twitter.