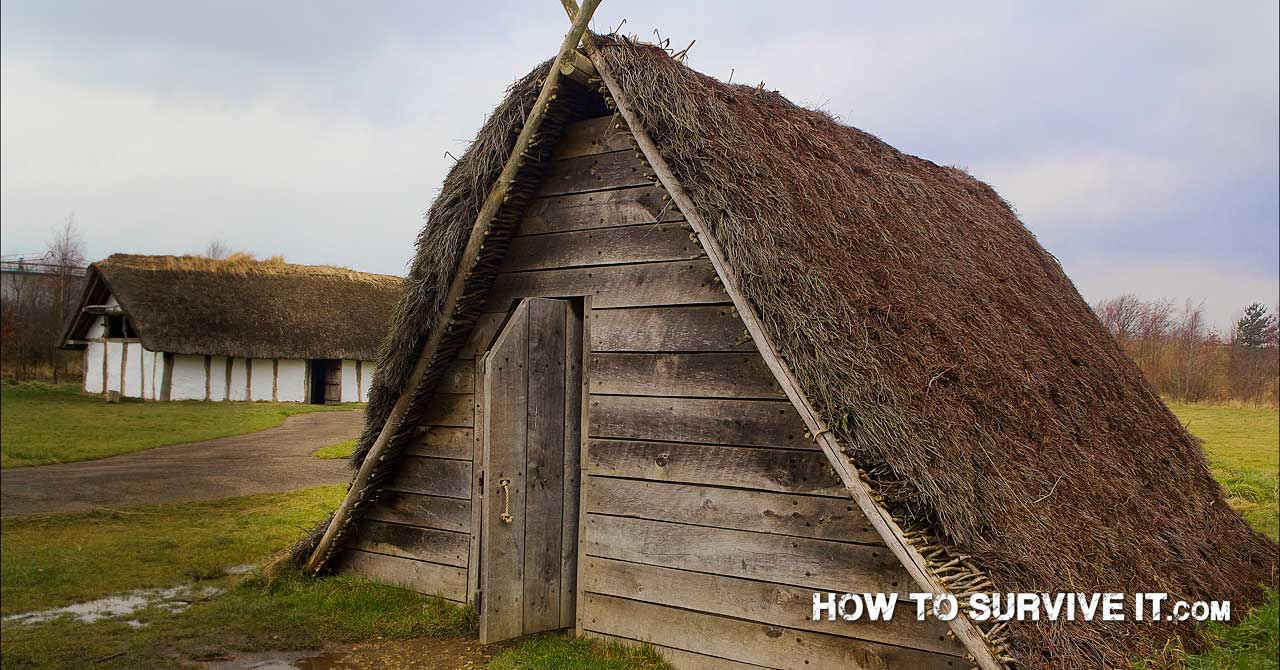 Imagine having a home that is truly yours, with no monthly rent or a mortgage payment. If you’re willing to live like our ancestors did, it can be done!

Whether you need to improves a shelter after a disaster, or just want to run away to the wilderness, these primitive houses may be the answer you need.

Here you’ll see how people from around the globe have built their own homes throughout history.

Tipis are cone-shaped shelters used by the Plains tribes of North America. They are made from wooden frames covered in buffalo hide. Early versions of these structures measured as much as 12 feet high.

The Lavvuu is wider than a tipi and can withstand high winds. Used as a temporary dwelling by the Sami people of Scandinavia, the lavuu was originally crafted with wooden poles covered in reindeer hide.

Wigwams are associated with the Algonquian Indian tribe. They consist of arched wooden framing poles, which are then covered with anything from bark and brush to animal hide. Wigwams may be triangular or dome-like in appearance.

The Navajo people first construct the hogans, which come in many shapes and sizes. They can be erected without interior posts and may feature walls made of wood or stone. The roofs consist of either packed earth or bark.

A burdei sits partially underground and has a history that reaches back 6,000 years. They could originally be found in the Carpathian Mountains in Eastern Europe. During the late 19th century, the burdei was also used North America.

Barabara were the homes of the Alutiiq and Aleuts of the Aleutian Islands. The base of the barabara is positioned underground, creating a barrier from the powerful winds that routinely sweep over this region.

The clochán is a hut-like structure made from overlapping pieces of stone. It is constructed without mortar and remains in tact due to compressional forces, a method called dry-stone. These dwellings were common in southwestern Ireland.

Log cabins are made from logs with notches cut into both ends, allowing for a tight fit once the logs are laid on top of one another. A family could construct a log cabin in a matter of days, and the finished structure could remain standing for years.

Longhouses are usually associated with the Iroquois tribes of North America. The longhouse is constructed with pole frames covered in bark, and measure up to 200 feet long. Smaller longhouses could shelter one or more families, while larger longhouses could accommodate 60 people.

Because the strong, lightweight and fast-growing bamboo is readily available in some regions of the world, including Asia and parts of Central and South America, it is a considered an excellent (and sustainable) source of construction material.

Pueblos share their name with the Native American tribe that first built them. Pueblos are multi-family homes built with bricks made from a mixture of straw and clay called adobe. Pueblos could shelter a whole clan, with each family residing in its own space.

It’s the surrounding earth that creates the walls on three or four sides of this structure, which is covered by a roof. These kinds of shelters provide excellent protection from wind and cold.

Igloos are made of snow and are commonly associated with the Eskimos in Northern Canada. They are crafted from large blocks of ice that are secured with snow to create the dome roof. An occupied igloo, warmed only by body heat, can reach temperatures as high as 60 degrees, even when it’s below freezing outside.

Portable and easy to erect, the yurt stayed popular with nomadic people residing in Central Asia for about 3,000 years. Yurts feature expandable circle-shaped frames that are covered in felt. A yurt can be set up in about two hours.

The walipini can be constructed for about $300, and use the surrounding earth as its walls. A greenhouse sits approximately six feet below ground level, allowing for year-round gardening, and the walls hold heat generated from daytime solar radiation. 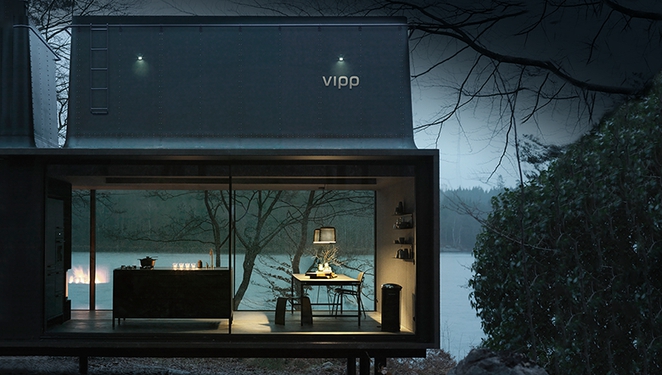 Oscar Wilde wrote in The Picture of Dorian Gray: “Nowadays people know the price of everything and the value of nothing.” I use that phrase a lot when people complain about the price of everything from furniture to tiny houses; short production runs and quality materials mean higher costs. But even I choke occasionally, such as with this visually stunning new prefab from VIPP, a Danish company that has been working with steel since 1939, starting with an iconic wastebasket that’s now in the Museum of Modern Art.

The VIPP shelter is a beautiful object, all glass and steel, 50,000 pounds of superior workmanship and design. 592 square feet of felt-lined modern living. It gives new definition to the word “turnkey”- there are no options whatsoever. It’s “a plug and play getaway.”

Indeed, they have chosen everything from the bedsheets to the toilet brush, it is all included. The specifications are top of the line, from the VIPP kitchen to the electric radiant concrete floors to the 10 inches of insulation. It is indeed a stunning minimalist modern object of desire.

And then it all begins to fall apart, perhaps in this interview with designer Morten Bo Jensen, who says:

The biggest difference between this getaway compared to anything else on the market is the fact that I am not an architect. The shelter is conceived more like a product than a piece of architecture that melds seamlessly with its surrounding. We didn’t start with a piece of land on which we customized a house taking into consideration the natural surroundings. There is plenty of amazing architecture out there, but we wanted to conceive something different; an escape in the form of an object designed down to last detail, where the only choice left to the customer, is where to put it. 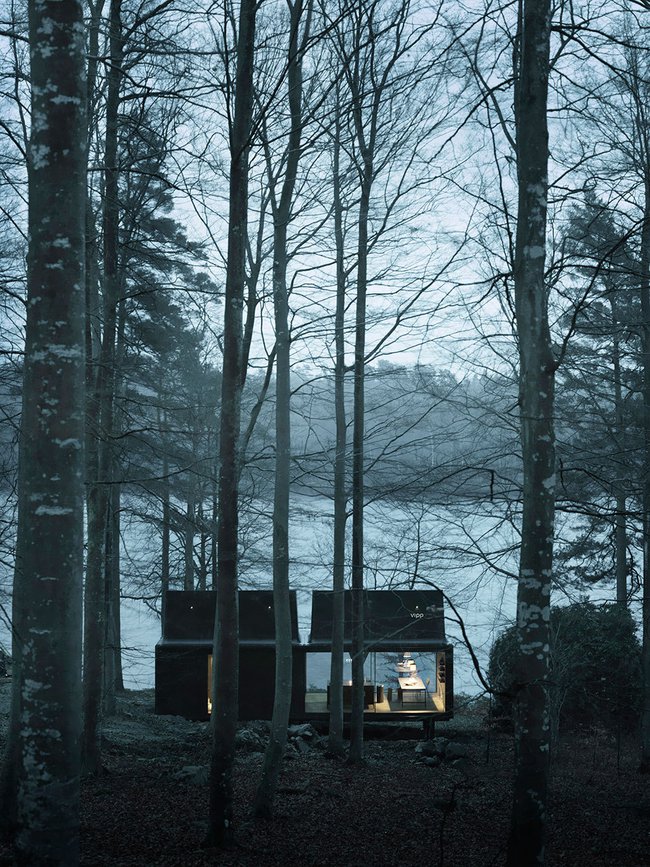 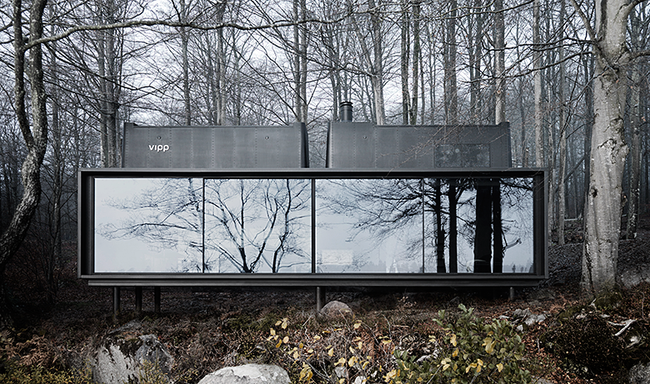 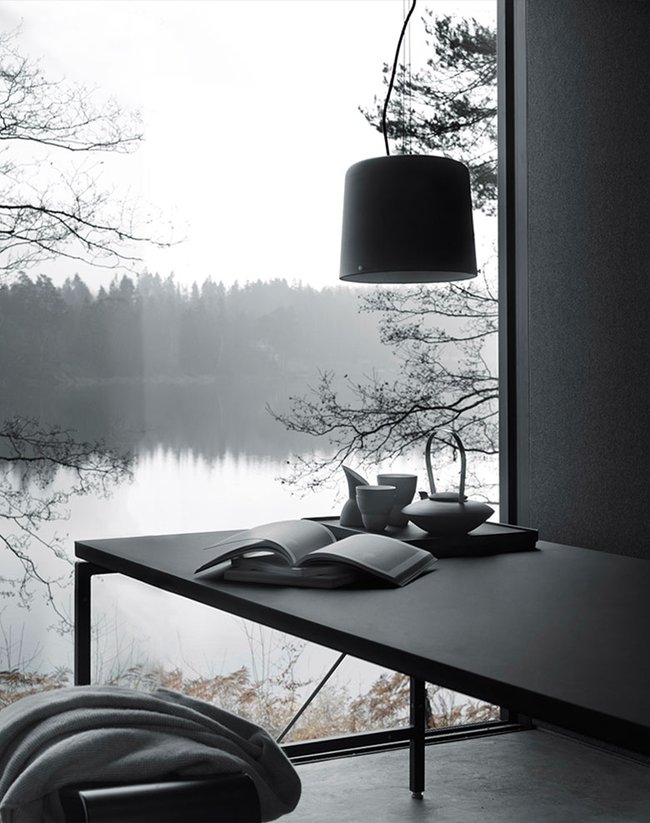 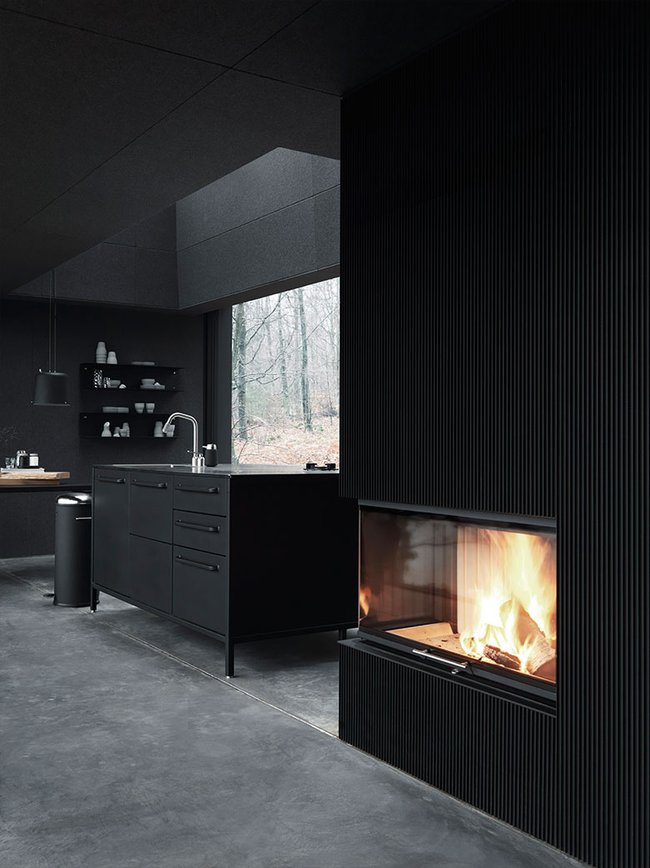 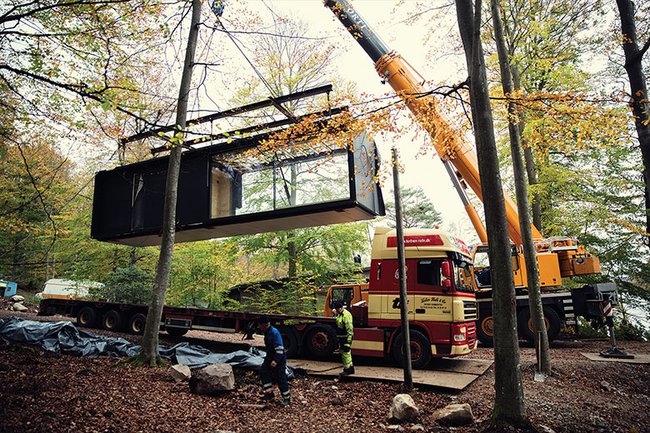 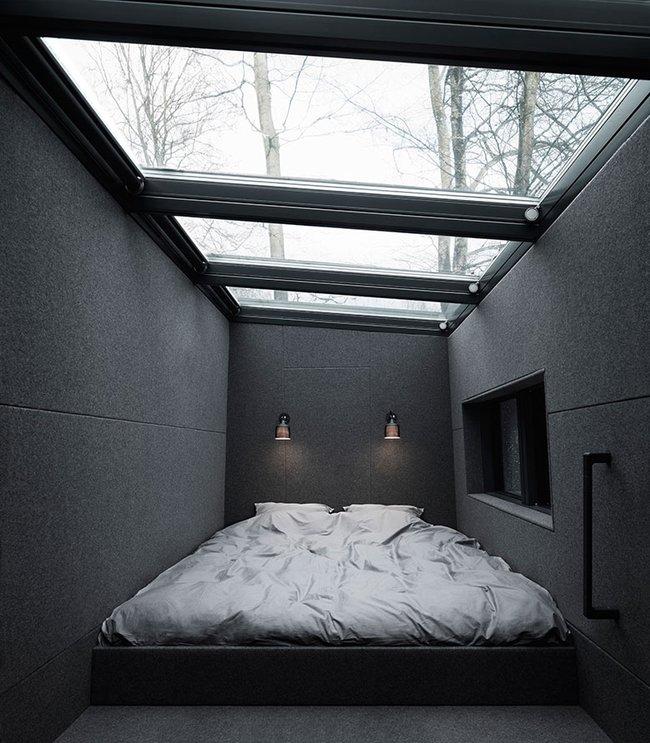 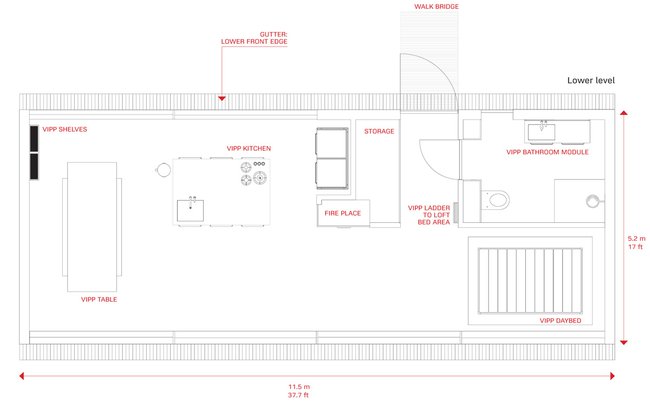 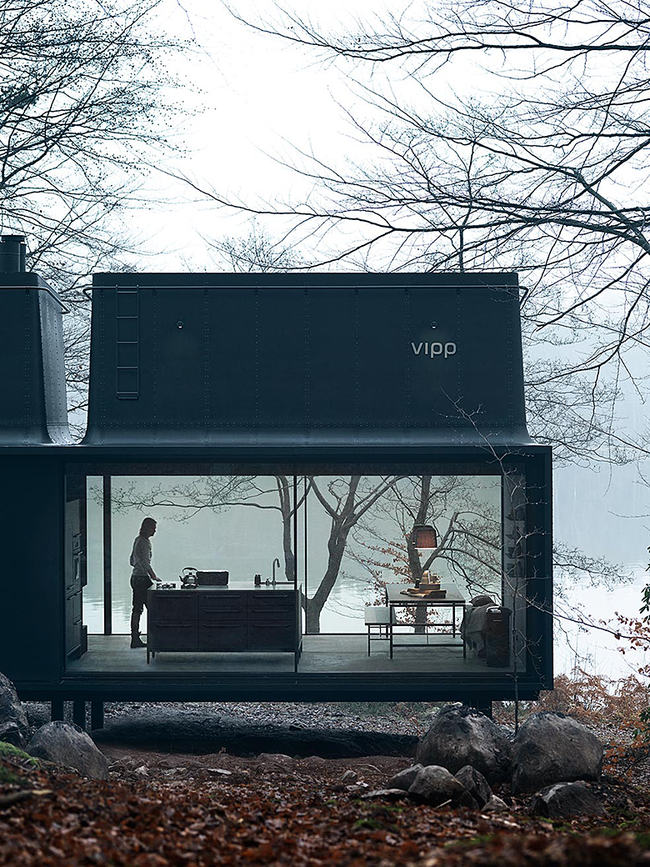 But architecture doesn’t work like that. You cannot design a building with a wall of glass and claim that it will work “in the darkest forest or the brightest desert”; put this object in full sun, with no shading and that wall of glass and black steel and it will be uninhabitable.

The loft will be an oven, even with the one opening window. But nobody will use it anyway; just try spending one night where you have to climb a steep ladder and then crawl up from the bottom of the bed. You will sleep downstairs on the second night.

Then there is the small matter of cost, which I usually downplay, but $US 585,000 is a lot of money for 592 square feet, for 50,000 pounds of glass and steel. That is actually the same price per pound as a BMW Series 2 Coupe; you can do your own price per square foot calculation. That also does not include land, delivery, crane rental, or site services like septic or electricity. And add 12% for US east coast delivery.

On another design website they title their post The Vipp Shelter is a plug-and-play prefab home that can be placed just about anywhere. If only it were. However you cannot call something “plug and play” if there are no plugs. So you may not have to buy a toilet brush but you have to buy infrastructure, which is surprisingly expensive and difficult.

Perhaps I am just bitter, because I spent two years trying to sell a high end minihome and ran into all these problems of connections and zoning bylaws and lofts and costs. I just look at this and see every problem that I had writ large. There are a dozen reasons that this kind of building cannot be placed just about anywhere; perhaps it will work in a nice Scandinavian climate with lots of shade and hopefully no mosquitoes.

I shouldn’t be so critical, it is a beautiful thing and I hope they sell like VIPP wastebaskets, also overpriced iconic objects of desire. But at least a wastebasket really can go anywhere and doesn’t have to be plugged in. Lots more beautiful documentation and photographs at VIPP. 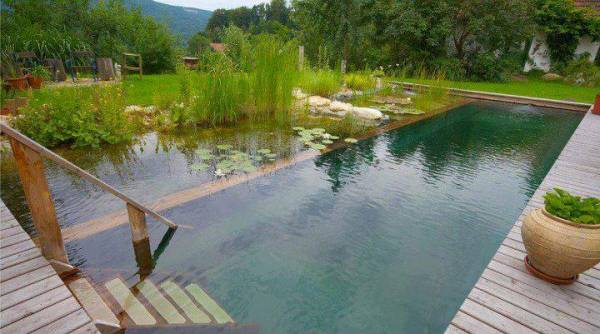 An alternative to chlorine pools, the BioTop Natural Pools use plants to keep water clean and clear. A natural swimming pool is a system consisting of a constructed body of water, where the water is contained by an isolating membrane or membranes, in which no chemicals or devices that disinfect or sterilize water are used, and all clarifying and purifying of the water is achieved through biological filters and plants rooted hydroponically in the system. Natural Pools provide crystal clear water without any use of chemicals. The natural pool creates the incomparable feeling of swimming in natural water. How To Make a DIY Natural Swimming Pool 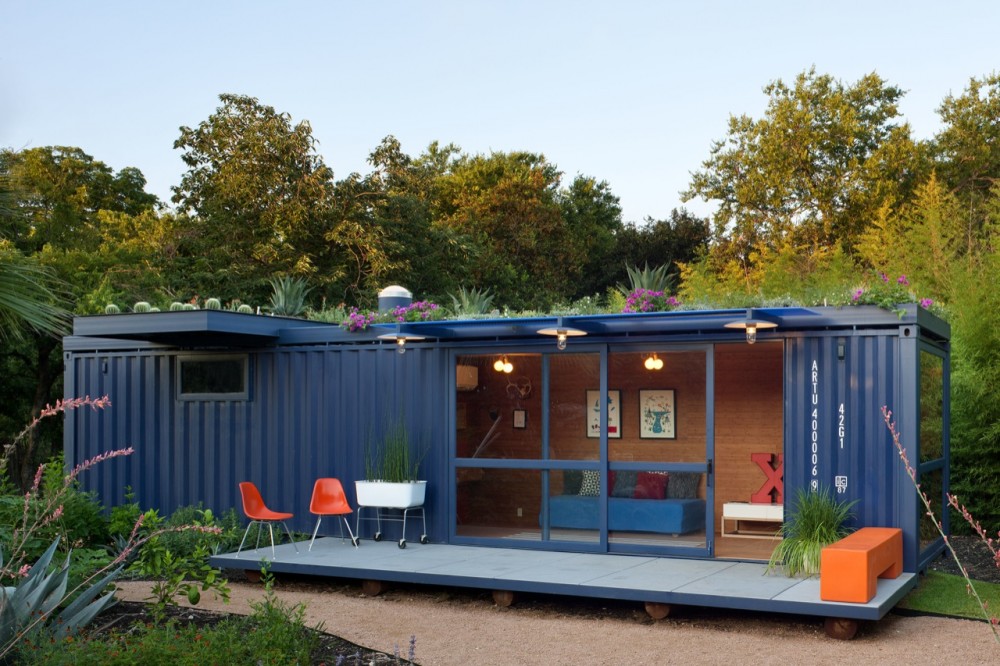 All you need is around $2000 to begin building one of these epic homes – made from recycled shipping containers! Check out some of these amazing creations!

A luxury home doesn’t always necessarily mean thousands of square footage, towering great rooms and gilded toilets. Take these homes for example: to begin building one of these epic houses, all you need is $2,000. That $2,000 will buy you a shipping container. What you do with that shipping container… well, that’s completely up to you. Some creative people have found a way to transform this rudimentary “room” with metal siding into luxury housing that blows us away. These homes are epic.

1.) A shipping container doesn’t have to be a closed space.

3.) Open up the metal boxes and let your imagination run wild.

5.) The shapes are basically the same, but wow.

7.) The best part about this one is that you know they made it out of shipping containers.

8.) This open concept was taken a step further with a sliding garage door.

11.) This is the kind of home that keeps a person happy.

13.) Recycled materials AND it’s good for the planet.

14.) This collection of containers is just epic.

If you enjoyed these what these people did with their containers then you will love this couple’s new tiny home.

The best part of the gallery that this Reddit user shared? The shipping containers are recycled materials, so you’re actually helping the environment if you invest in making a luxury shipping container home. You can’t beat a base price of $2,000. What a marvellous idea; share it with others by clicking on the Share button above/below this article. 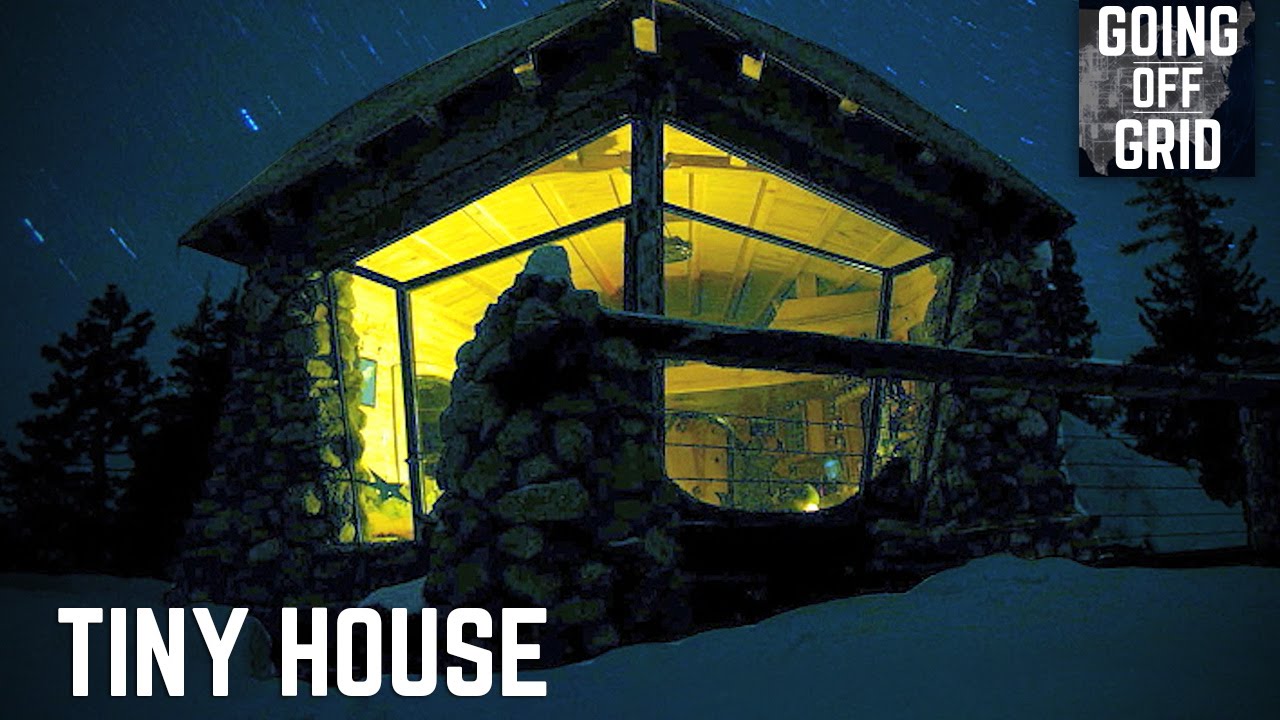 The Argand lamp was new to Thomas Jefferson in Paris in 1784, according to him gave off “a light equal to six or eight candles.” This precursor to the rocket stove gained great popularity in the early 1800’s, due to its ingenious design and multiple uses. The Argand lamp had a sleeve-shaped candle wick to … 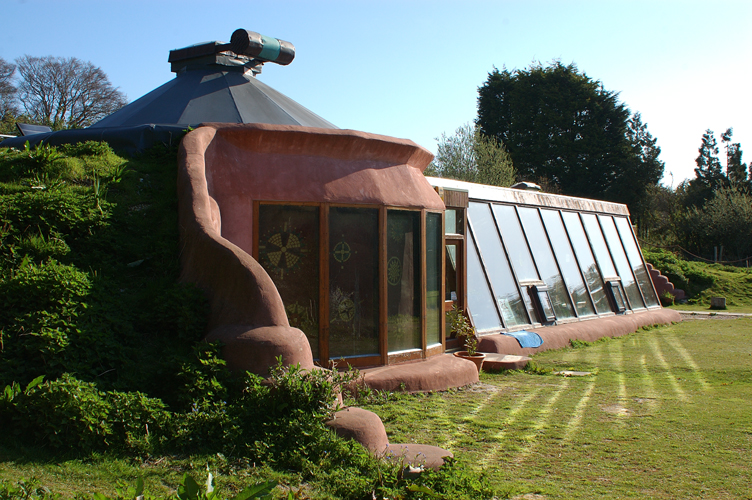 Earthships are 100% sustainable homes that are both cheap to build and awesome to live in. They offer amenities like no other sustainable building style you have come across. For the reasons that follow, I believe Earthships can actually change the world. See for yourself!