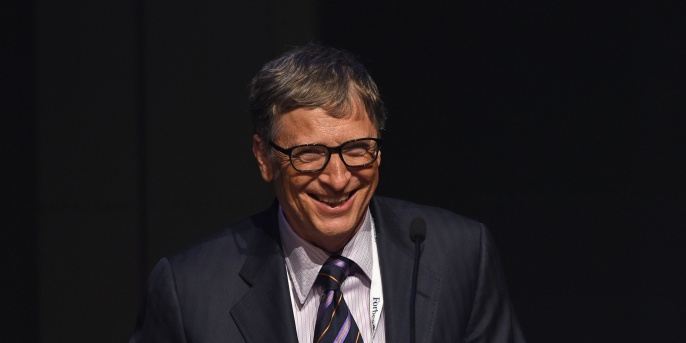 The Supreme Court may have dealt a crushing blow this week to President Barack Obama’s efforts to curb climate change, but all is not lost.

Microsoft co-founder and billionaire philanthropist Bill Gates announced plans to spend up to $2 billion on innovative renewable technologies over the next five years. In an interview with the Financial Times ( paywall), Gates said he hopes to “bend the curve” through the cultivation of “breakthrough” technologies, doubling an already impressive billion-dollar investment. He has so far written checks to 15 green companies, he said, and has contributed venture capital funds to another 30.

In the interview, Gates calls for far greater funding for renewable research, saying investment “should be like the Manhattan Project and the Apollo Project in the sense that the government should put in a serious amount of R&D.” He pointed to the drawbacks of now-commonplace technologies like solar, which can only provide power during the day.

“There’s no battery technology that’s even close to allowing us to take all of our energy from renewables and be able to use battery storage in order to deal not only with the 24-hour cycle but also with long periods of time where it’s cloudy and you don’t have sun or you don’t have wind,” he said.

Despite the recent Supreme Court ruling that undercut the Environmental Protection Agency’s regulation of mercury and other toxic emissions from power plants, the U.S. has been making strides in the fight against climate change.

The Huffington Post’s Kate Sheppard notes the EPA is finishing up rules that would limit greenhouse gas emissions from new and existing power plants, which should be finalized in the coming weeks. And the president has come out swinging against the warming phenomenon, citing the hazards against American’s health and a risk to national security.

Renewable energy is expected to draw trillions in investment over the next quarter century, but the Bill and Melinda Gates Foundation has come under fire before for some aspects of its climate activism.

You can read Gates’ entire interview at the Financial Times. 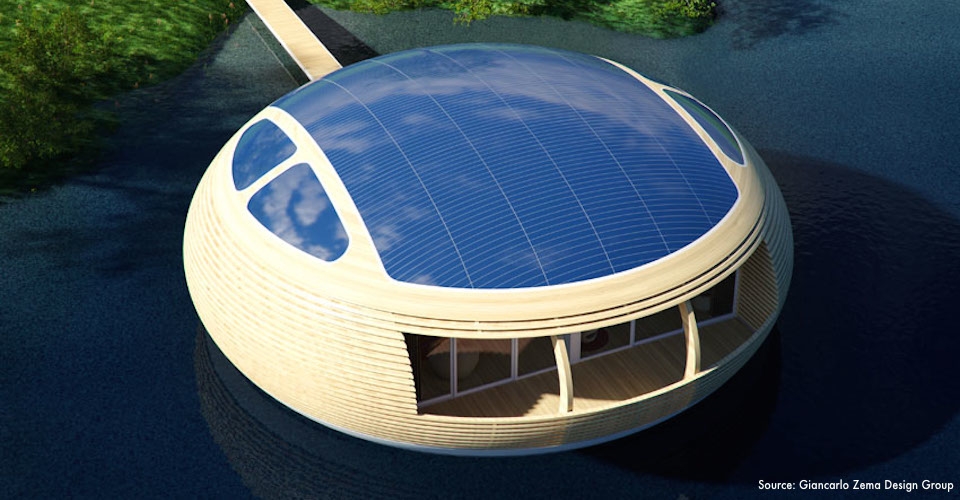 If you’ve ever pondered the idea of living on a houseboat but found the idea a little too “boaty” for your tastes, perhaps there’s a more fashionable alternative. Italian architect Giancarlo Zema, who has a reputation for dreaming up insanely extravagant mega-yachts and exotic underwater resorts, has teamed up with London-based EcoFloLife, a firm that specializes in “eco-friendly floating structures,” to create a 1,000 square foot energy-efficient floating home made from recycled wood and featuring a recycled aluminum hull. The overall design aesthetic: more house and less boat.

Waternest 100, as it’s called, stresses sustainability. As the company declares, “The world around us is becoming increasingly chaotic and conformist, requiring fully eco-friendly and recyclable housing units which allow us to live in complete independence and in harmony with nature while respecting and admiring it. The ongoing climate changes and the resulting sea- and river-level rises force us to ponder on the eco-sustainability of our housing choices.” In other words, one way to protect the Earth may be to step off it and reside instead on the 70 percent that isn’t dry land.

Waternest 100 is only about 36 feet across and 16 feet high, and its roof is covered in 60 square meters of solar panels that the company claims can generate 4 kilowatt peak (kWP), a sunny noon-time performance that outstrips most typical home solar installations. Skylights, balconies, and windows help to bring the outdoors in, under the assumption that wherever you choose to float your boat, you’ll have a very nice view. The interior can include a living room, dining area, bedroom, kitchen and bathroom-or other configurations based on need (such as office, bar, restaurant, shop and exhibition space).

As for logistics, the company says that, “WaterNest 100 does not require a boating license or complicated construction permits. Once you’ve chosen the perfect berthing place, it’s only necessary to request a simple authorization from the local maritime authorities for inland waters.” (At least in the UK.) It can be trucked to vicinity of its final location and then towed to its final destination. EcoFloLife does recommend a location with “calm waters” such as a river, lake, bay or atoll.

Skeptics note that any boat’s hull ultimately needs to be maintained, and it’s unclear if Waternest units would ever need to be pulled from the water for maintenance, and if so, how that would be accomplished. It may also not be quite so simple to just float your home wherever you feel like it. One can imagine some very interesting meetings with the local zoning board.

And with a starting asking price somewhere around $540,000, this kind of sustainability won’t come cheap, although low operating costs-and presumably the absence of property taxes-might make it affordable over the long haul.

Don Willmott is a New York-based journalist who writes about technology, travel, and the environment for a wide variety of publications and websites.

If you’ve just had it with taking the subway, or sitting in an office, or just generally being around other people, you may be in luck. Slovakian firm Nice Architects has built an egg-shaped “Ecocapsule” that runs entirely on solar and wind energy, allowing its dweller(s) to live both literally, and figuratively, off the grid.

The completely self-sustaining portable home contains a 9,744 watt-hour battery, a 750 watt wind turbine, and high-efficiency solar cells that can support you for about a year in pretty much any location in the world, provided there is some sunlight. (It probably wouldn’t work in a cave, for instance, should someone desire to live in one.)

The capsule also includes a rainwater collection and filtration system. Inside, there’s a kitchenette with running water, a flushable toilet, a shower, a bed, and work space. Nice Architects says the capsule, which is about 4.5 meters (14.7 feet) long and 2.4 meters (7.9 feet) wide, can comfortably fit two people.

The egg-home can be “easily transported” by trailer, according to the company, and can even charge the electric car that’s towing it.

But beyond just nomadic living, the Ecocapsule has plenty of other potential applications, from providing shelter in disaster areas to doubling as scientific research stations.

Nice Architects will unveil its prototype at the Pioneers festival in Vienna on May 28 before taking pre-orders at the end of 2015 for shipping in the first half of 2016. The company says the price will be released later this year, though there’s already a steep shipping cost. Sending the capsule from Slovakia to New York, for instance, will cost you €2,200 ($2,383) alone, and the capsule itself is likely to run to tens of thousands of dollars. 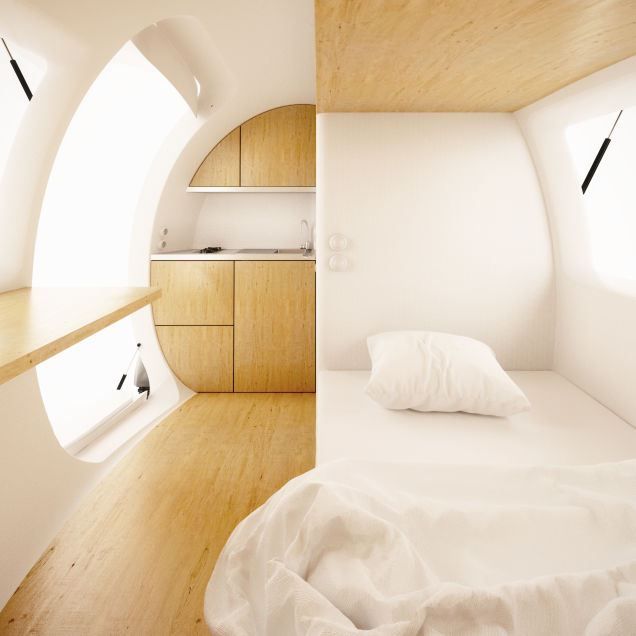 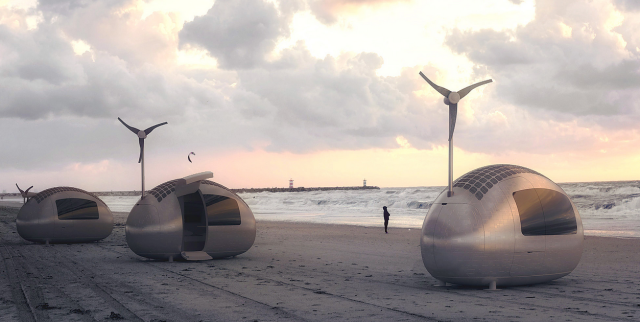 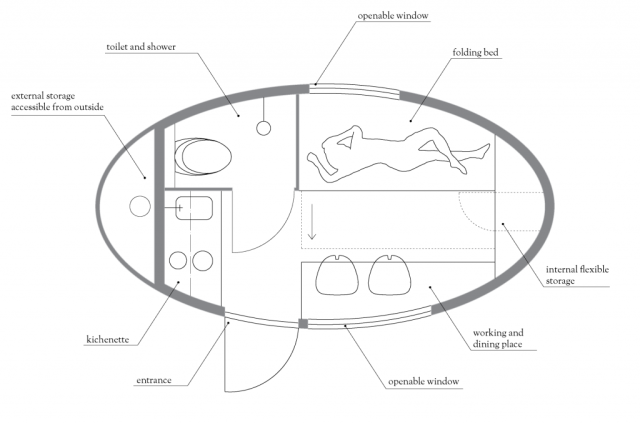 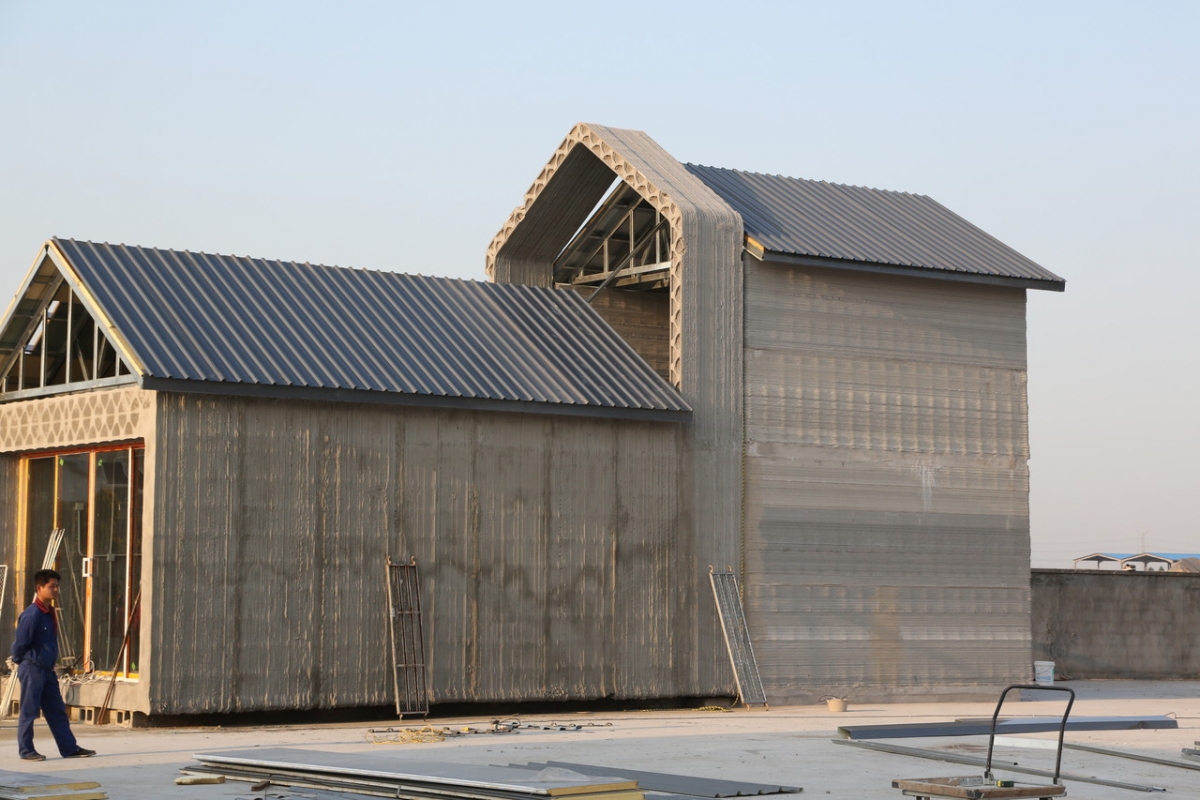 A Chinese construction firm based in Shanghai has succeeded in building 10 houses each measuring 200 square metres in 24 hours by using an enormous 3D printer.

The houses are all eco-friendly and constructed from 3D-printed building blocks made from layers of recycled construction waste and glass fibre and mixed with cement.

Large 3D printers have been in existence for several years and have been used to make plane parts and prototypes.

“We purchased parts for the printer overseas, and assembled the machine in a factory in Suzhou. Such a new type of 3D-printed structure is environment-friendly and cost-effective,” said the 3D-printer’s inventor, Winsun CEO Ma Yihe.

Winsun used architectural design software AutoCAD Architecture to not only plan the building but also to calculate tracing paths that took into account plumbing, electrical lining, insulation materials and windows, that would be added once the main structure was built.

The company holds 77 national patents for its construction materials.

Ma’s office building, which covers an area of 10,000 square metres, was also constructed with 3D-printed walls and took a month to build from an assembly line of four 3D printers.

“Industrial waste from demolished buildings is damaging our environment, but with 3D-printing, we are able to recycle construction waste and turn it into new building materials,” said Ma.

The MIT Climate CoLab has announced 22 contests that seek high-impact ideas on how to tackle climate change.

A project of the Massachusetts Institute of Technology Center for Collective Intelligence, the Climate CoLab seeks to harness the knowledge and expertise of thousands of experts and non-experts across the world to help solve this massive, complex issue.

“As systems like Linux and Wikipedia have shown, people from around the world – connected by the Internet – can work together to solve complex problems in very new ways,” says MIT Sloan School of Management Professor Thomas Malone, director of the MIT Center for Collective Intelligence and principal investigator for the Climate CoLab project. “In the Climate CoLab, we’re applying this approach to one of the world’s most difficult problems – climate change.”

The Climate CoLab has a rapidly growing community of over 30,000 members from across the world. Anyone is welcome to join the platform to submit their own ideas, or comment on and show support for other proposals on the site.

Together, the contests cover a broad set of sub-problems that lie at the heart of the climate change challenge, including: decarbonizing energy supply, shifting public attitudes and behavior, adapting to climate change, geoengineering, transportation, waste management, reducing consumption, and others.

The popular U.S. Carbon Price contest is returning this year, seeking innovative policy and political mobilization strategies on how to implement a carbon price in the United States. Serving as advisors for this contest are former U.S. Secretary of State, George P. Shultz; former U.S. Rep. (R-SC) and current director of the Energy and Enterprise Initiative Bob Inglis; and former U.S. Rep. (D-IN) and current president of Resources for the Future, Phil Sharp.

A number of contests are run in collaboration with organizations such as the World Bank Negawatt Challenge ( Urban Energy Efficiency), the MIT Sloan Latin America Office ( Energy Solutions for Latin America), and the City of Somerville, Massachusetts ( Atypical Solutions for Going Carbon Neutral).

In addition, this year the Climate CoLab team announced a new set of contests in which people can create climate-action plans for major countries and for the whole world. In these contests, members combine proposals that have been submitted in other contests and use a suite of climate modeling tools to project the real-world climate impacts of the plans they create.

All contest winners will have an opportunity to present to people who can support the implementation of their ideas, including policy makers, business executives, and NGO and foundation officials. They will also be invited to showcase their proposals at MIT this fall, where a $10,000 grand prize will be awarded. See highlights from last year’s Climate CoLab conference at climatecolab.org/conference2014.

In addition to submitting ideas, the Climate CoLab also welcomes people from around the world to offer feedback and support proposals they find the most promising.

Submissions are due by May 16 at 11:59:59 p.m. EDT. Enter soon to receive feedback from Climate CoLab community members and the experts who are overseeing the contests. To submit a proposal, or read and comment on other proposals, visit climatecolab.org. 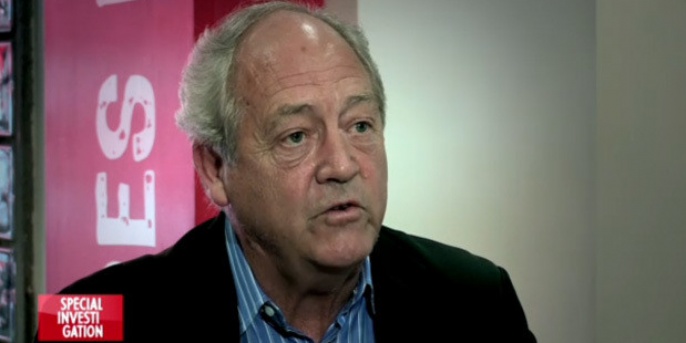 This is not very good PR for agricultural company Monsanto.

While being filmed by French cable channel Canal+, GMO advocate Dr. Patrick Moore claimed that the chemical in the company’s Roundup weed killer is safe for humans to consume and “won’t hurt you.”

He then refused to drink it when offered a glass by the interviewing journalist.

Dr. Moore was insisting that glyphosate, the active ingredient in the herbicide, was not increasing the rate of cancer in Argentina.

According to EcoWatch, Moore used to be a member of Greenpeace before becoming a GMO advocate.

Editor’s Note:ALSO ON HUFFPOST: A previous version of this article incorrectly stated that Dr. Patrick Moore is a lobbyist for Monsanto. A statement from Monsanto says that Dr. Moore is not and has never been a paid lobbyist for their company. This version has been corrected.