An Intro to Anarchism

Anarchism. The word stirs up strong opinions in most people. Because it’s ridiculous, right? I mean, if there’s no one telling us what to do then all hell will break loose. Why should you even give it the time of day when we’ve clearly moved passed this primitive idea and have gone on to much better, more complex things like Capitalism or Socialism? Anything would be better than nothing, right? In case the sarcasm wasn’t obvious enough, I apologize for having led you even further in the wrong direction. But this is the thought process of most people and it’s a travesty. There is a veil of misconception covering the simple beauty of anarchism that keeps it from being considered as a viable option for the future of society. The need for a government is taken for granted in most political and economic discussions. If the veil on anarchism is lifted and given the chance in spite of the current systems, a wonderful hope for the organization of future societies can be seen: one founded in true freedom to promote humanity. In order to analyze why this is the case, we should first address what the current understanding of anarchy is, and why it is the way it is.

From what I gather from the mainstream view, anarchism is:

“A naive attempt at utopia that inevitable encourages and leads to violence and chaos.”

That’s the worst impression I get from it. It’s never said in those exact words, but it’s implied over and over until it forms this impenetrable wall of doubt that most people can’t get through when contemplating anarchism. In fact, the word itself has gotten so much bad publicity that it’s become synonymous with “chaos.” However, I didn’t want to be a hypocrite and just assume that’s what people think because the media says so. So I explicitly asked a few.

I’ve been collecting the opinions of my friends, family and coworkers in order to gather a realistic representation of what people actually think of anarchism. I asked them only a few, short and direct questions but received somewhat lengthy and strongly emotional opinions. To be fairer than the introduction to this article was, quite a few of the people I asked actually had a very accurate answer to “what is the definition of anarchy?” Others had somewhat skewed views, but overall I was pleasantly surprised.

“My basic understand of anarchy is: giving power to the people with no government to rule over them because the belief is that people can govern themselves and absolute power is no good.”

“I think it involves the abolition of any form of governance; to form some sort of community based structure, no top-down approaches to anything but rather voluntary involvement.”

These are great answers if you compare them to the actual definition of anarchism. Looking at the etymology, the greek root of the word roughly translates to “without authority”, which is its most broad definition. It’s also the definition I give to others, because although most discuss anarchism in terms of only political governance, it carries much broader implications than that. It’s a philosophical approach to the world. It’s the crusader for true freedom. Its focus is on avoiding at all costs, the presence of authority, or in other words hierarchical power. So for example, a true anarchist would just as much reject Christianity because of its emphasis on hierarchy as they would authoritarian government.

The answers I received made it apparent that people weren’t just ignoring this idea, they’ve considered it and quite often have an emotional response to it because, I think, they want it to work. Who wouldn’t want it to work? I soon found out why.

When asked if it has its merits, it was apparent there was quite a few misconceptions. It seemed like they had given it some thought, but just didn’t go any further because the conclusion would inevitably be the same: anarchy wouldn’t work in practice. In fact, this was by far the most popular reason why people didn’t agree with anarchism. “It’s good in theory, just not in practice.” This is the same response usually given when discussing communism as well. Ironically, communism and anarchism have never really been giving a true large scale attempt; meanwhile the current systems that have been tried are not living up to their own theories and are failing in practice. 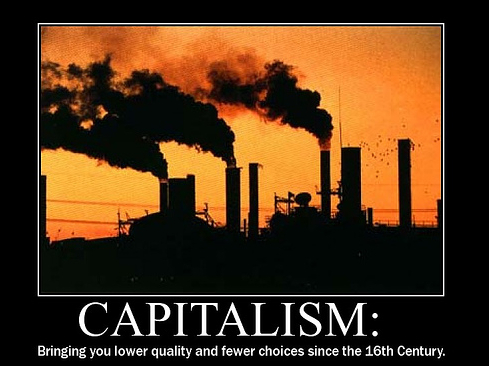 A very accurate summation of the general opinion was given to me by Craig Steinberg:

“I believe in living in a lawful and civilized country. In my opinion anarchism is a passing feeling amongst the youth (under 40) and is not beneficial to our society primarily because it has been hijacked and associated with radical extremists that think it’s ok to have chaos because it leads to anarchy. I think the majority of people don’t know what anarchism truly is. So do I think anarchism in its present form has merit? no. Do I think the definition has merit in theory? yes. Much like communism it’s a great idea on paper but in reality it leads to much suffering.”
Craig Steinberg

He’s correct in saying that the term has been used and re-used until it belonged in the trash, which is why I’d like to restore it and give it new meaning. Meaning that will be concrete and leave little room for theft or slander. I hope to give the term merit in theory and practice, because what good is theory if it has no use?

If any of this seems similar to your own beliefs about anarchism, I urge you to read on to see why it’s far from being ridiculous, utopic, or naive; see why we think we need a government and why that’s a completely false belief.

In order to clear up the confusion, a brief history of Anarchism is in order.

Anarchism was practiced for a very long time before it was ever conceptualized and given a name. This should be obvious since there was a beginning to authoritarian structures like the church and state, therefore there was none before them, aka anarchy. Please note that this is an oversimplification to which I’d like to draw attention. Just because there was no official hierarchical overseeing doesn’t mean authority didn’t naturally arise within group dynamics. Humans are social animals and if a group is to succeed, the individuals within it must compromise with each other to establish the most beneficial structure for the group. The more athletic ones did the hunting, the craftier ones made tools, and the older ones gave advice. This in itself is not authoritarian, it’s simply cooperative and organizational. The problem comes when you have an individual with a particular set of traits. This set of traits makes it clear that they should be the one to organize or coordinate the others within the group, since there’s often a need to coordinate between parties. It’s at that point that the individual and the group can allow this person to become an authority. Since it’s so easy for this to happen, it would be naive to think authoritarianism didn’t exist before church or state did. However, just because it happened easily, doesn’t mean it was right or necessary.

Then came organized religion and its disguised twin, the state. Needless to say, this was an extremely authoritarian era that suppressed most of what it is to be human. As a response to this overly structured system, The Enlightenment happened and brought in the Romantic era.

No, I’m not talking about the “Leonardo DiCaprio and Kate Winslet Titanic” – type of romantic, nor the “50 Shades of Grey” – type. I’m referring to the rebellion against structure and the celebration of human nature, freedom of thought and creativity that happened at the turn of the 19th century. It’s what helped free people from the Church, and to a lesser extent, the State. This is where Anarchism was conceptualized in an attempt to re-examine the need for a State, remove Authoritarianism, and encourage true humanity, not the “humanity” defined by Church and State that was more like a human-resource than anything else. So if the Enlightenment and the Romantic era were such a good thing for civilization, how did Anarchism become so infamous?

There’s a lot to say on the smearing of the word “anarchist,” but I’ll be brief. It’s been actively bashed since its inception until today, so there’s no real wonder why it has a negative public perception. We have to put things in perspective and realize that people and specifically violent groups commit violent acts. These people can belong to any number of groups, religions, countries, and ideologies. But if you want to discourage or smear a particular sect, all you need to do is refer to these bad apples by that particular name. You can see how the media and other institutions can use this tactic to their advantage and effectively influence public opinion of any group simply by how they word statements. If they wanted to discourage Islam, they’d report a violent act as “today, a Muslim group blew up a bus,” not “today, al-Qaida blew up a bus.” This is what regularly and very obviously happens to anarchism. As soon as anarchist ideologies and groups around them started to form, acts of violence were routinely blamed on “Anarchists” even when they weren’t anarchists! For example, the German Baader-Meinhoff gang were often called “anarchists” despite their self-proclaimed Marxist-Leninism.

I constantly see in the press, especially during the Montreal student protest, the media referring to students breaking windows as anarchists. Most of them are not anarchists, and are not demonstrating anything close to anarchism. Even if they were self-proclaimed anarchists it wouldn’t mean anything in relation to the crime. It means an immature angry asshole broke someone’s window for such and such a reason – that’s what it means. This may seem a fine line, or like I’m mincing words, but it’s been shown over and over again that there’s an active attempt at smearing any group that’s anti-authoritarian and falsifying charges against them so they can publicize it and show the public how dangerous it would be if more people were against authority against their authority. “Les agent provocateurs” are a very real thing. But don’t take my word for it, since I’m not going to go in depth and attempt to prove this to you. Start by taking heed from the anarchist thinker, and Nicolas Cage look-alike, Emma Goldman:

“It is a known fact known to almost everyone familiar with the Anarchist movement that a great number of [violent] acts, for which Anarchists had to suffer, either originated with the capitalist press or were instigated, if not directly perpetrated, by the police.”
Emma Goldman

The state of anarchism (no pun intended) isn’t good. Its commendable roots have been stolen and discounted to the point where it’s almost taboo to discuss out loud. Hopefully, now that you’re more informed about its unfortunate upbringing, you can more openly consider its merits. In the next part of this series on anarchism, I’ll go into detail on more of what it is than what it isn’t and hopefully destroy many of the misconceptions surrounding anarchism.

27 thoughts on “An Intro to Anarchism”