What Our Food Is Really Doing to the Planet, in 15 Jaw-Dropping Images

When current science news is filled with pictures – incredible, beautiful, literally awesome pictures – of planetary bodies 3 billion miles away, it’s easy to forget what’s happening on the soil beneath our own feet.

California’s already experienced almost four years of drought, brutalizing the state’s ability to provide food to the country and the world beyond it. The state’s insatiable thirst, largely due to its high concentration of farms, is leaving its nonagricultural areas high and dry. But that’s not even the half of what our need for a full pantry is doing to the planet. 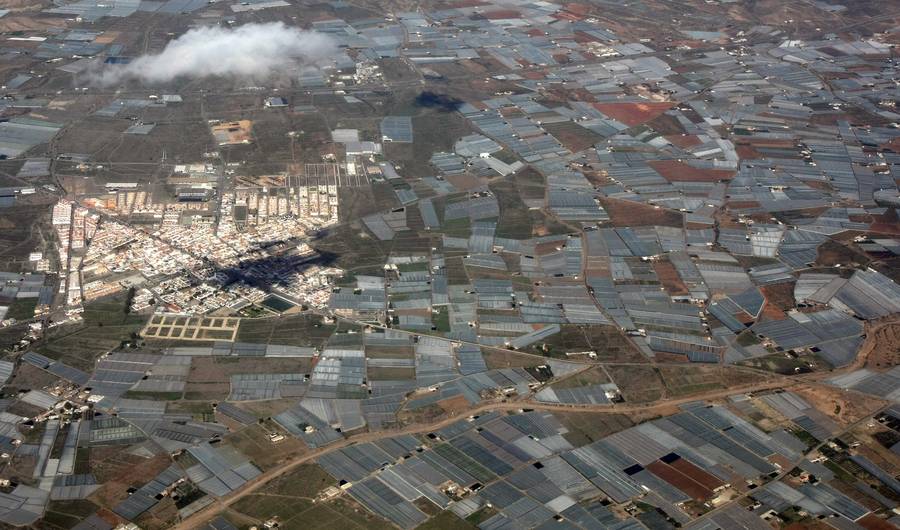 Ten years ago, a report in National Geographic claimed 40% of the Earth’s land was dedicated to agriculture. That was over half a billion people ago. As the world’s population grows at an alarming rate, more of the planet’s real estate needs to be turned into farmland. While that means more food for everyone, it also means destroying the nature beneath it. 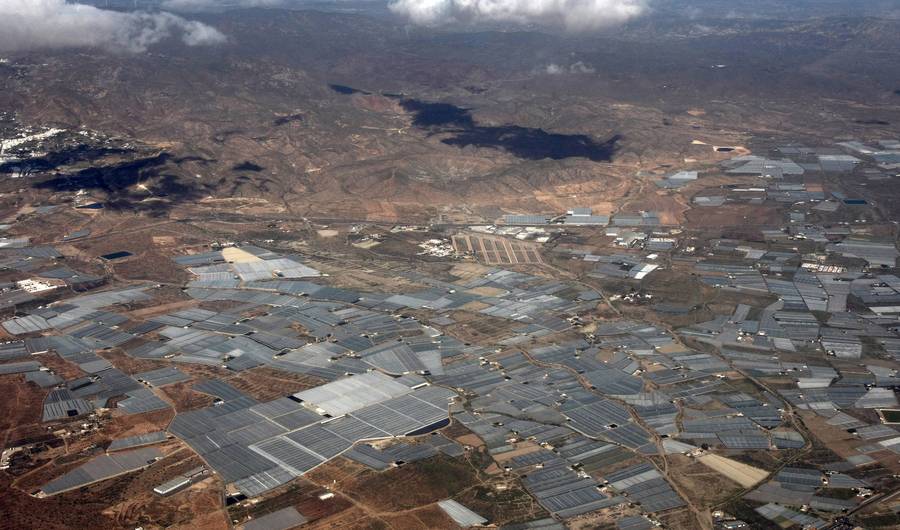 In Almería province, Spain, where a massive portion of Europe’s fruits and vegetables are grown, plastic greenhouses stretch across the country like creeping moss, overtaking quiet landscapes with hydroponic megafarms. “They block up dry riverbeds and destroy mountainsides but nobody does anything, however much we complain,” environmentalist Juan Antonio Martínez said about diggers carving terraces in a nearby province, according to the Guardian. “If there is a serious storm, much of this will be washed away.”

There’s evidence linking some of the pesticides used in those greenhouses to cancer and other health complications.

If findings from a professor in Granada province ring true, some of the chemicals in use have come with increased breast cancer rates among women and testicular issues in boys. But the money to be made from bolstering demand is enough to keep local authorities from coming down too hard on farmers not obeying the rules.

In 2012, it was estimated that the world’s population produced 2.6 trillion pounds of garbage – or the weight of about 7,000 Empire State Buildings.

Where Martínez lives, the greenhouses are mostly run using hydroponic systems, engineered to keep water use low and evenly distributed. In northern Saudi Arabia, however, where water is scarce and large swaths of real estate have been converted to farmland, the dwindling groundwater, originally the key to keeping Saudi Arabia’s wheat industry afloat, forced the country to search for more desperate options.

Irrigation farm fields near Hail, in Saudi Arabia, don’t use hydroponics. But that means huge water demands in the middle of a desert. 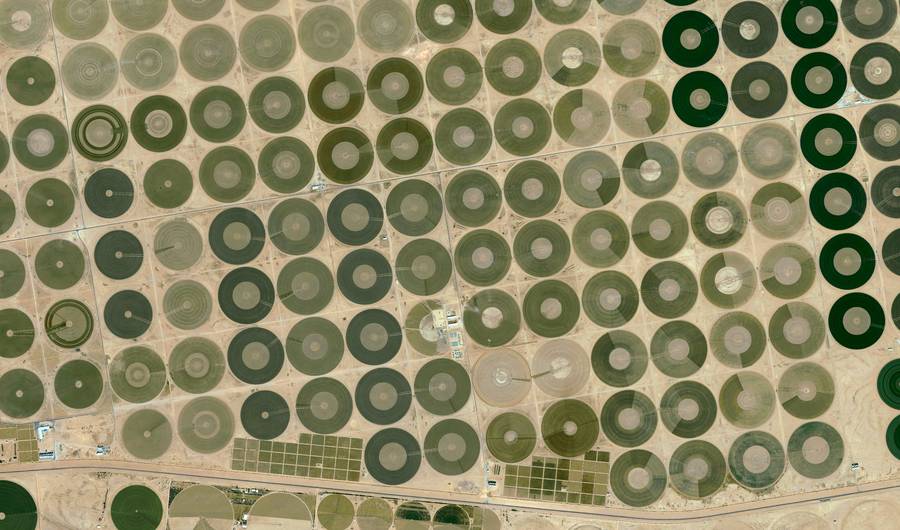 With so many farms, the country needs to look elsewhere for water. 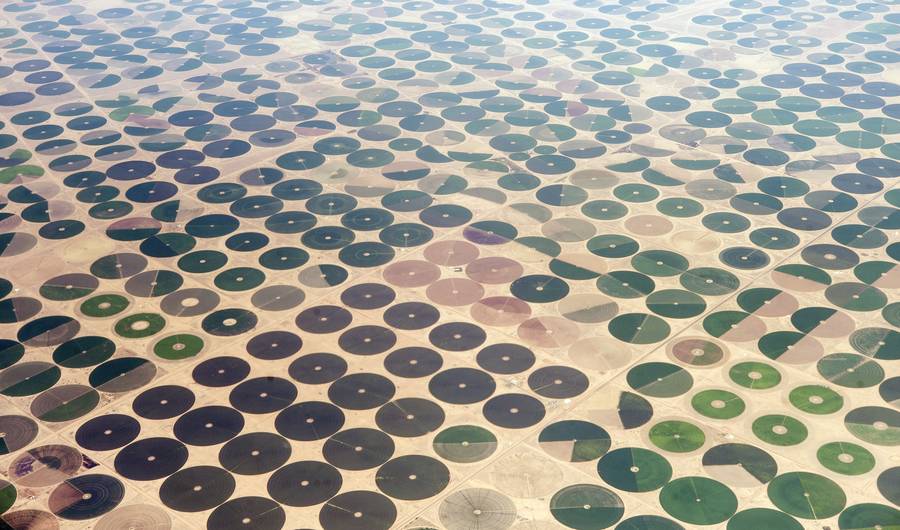 With low rainfall and high export demand, livestock farms in California are turning into dust bowls. 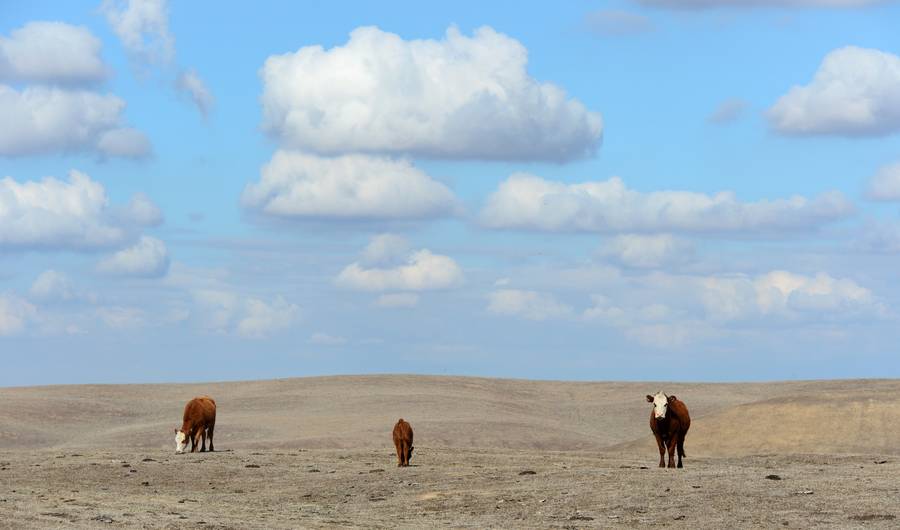 A 2013 study from researchers in Kenya, Australia and Austria found that the livestock sector across the planet produces 285 million tons of meat each year – which comes out to about 80 pounds of meat per person. That, of course, implies that the global community puts away a small person’s worth of animal parts every year. In reality, according to the researchers, Americans eat way more than most people in the world. We consume 270 pounds of meat a year on average.

The drought in California makes this usually lush pasture dry as a bone. 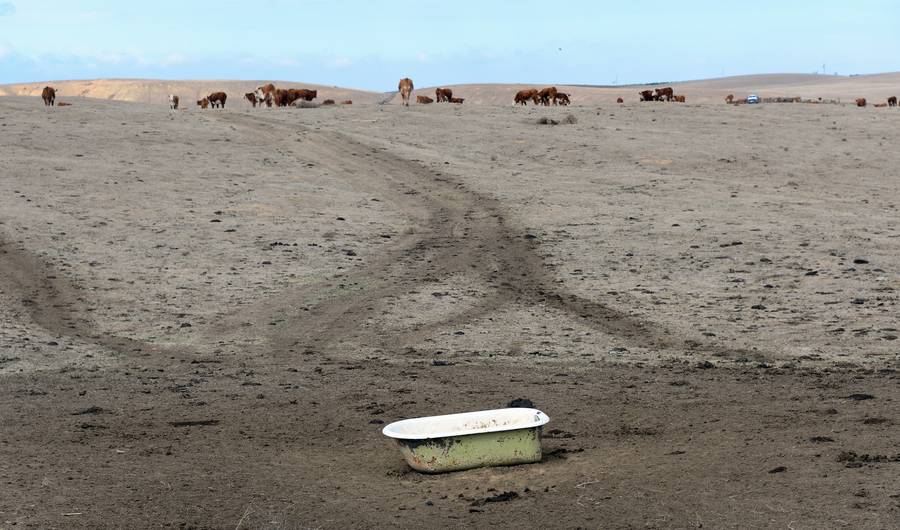 According to Time, 1.3 billion tons of grain are polished off by livestock every year. They’re like walking garbage disposals, and when they aren’t able to eat the grass of their pastures, like when their pastures turn into giant dust bowls, they have to turn to imported options. Grain comes from a lot of places. One of the major producers of cattle’s favorite carb is the incredibly thirsty Saudi Arabia.

Thanks to overfishing, some species of fish are caught faster than they can reproduce. 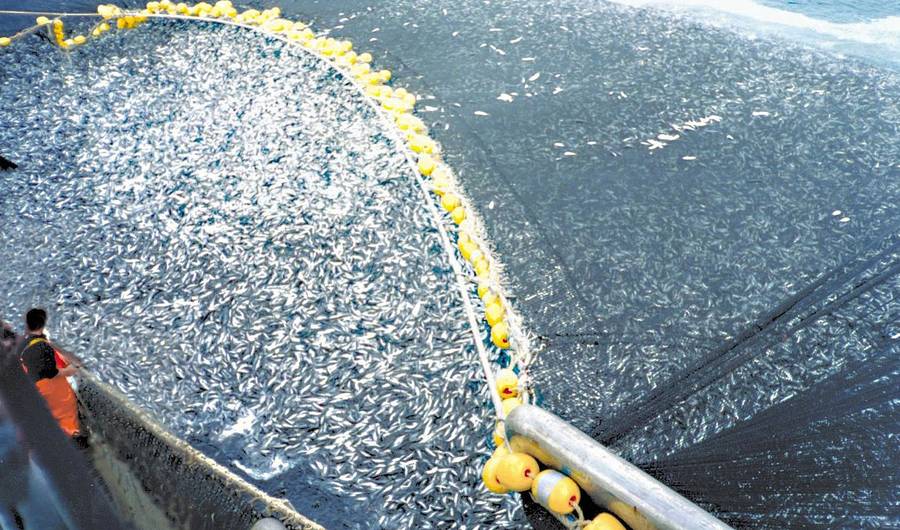 Thanks in no small part to the global appreciation for spicy tuna rolls, the ocean is running dangerously low on bluefin tuna, among other fish, due to overfishing. According to a 2013 report from the, the sushi mainstay’s population has dropped more than 96% in the Northern Pacific Ocean.

A huge percentage of the fish caught are too young to reproduce, making the population drop faster without offspring to buffer the species. 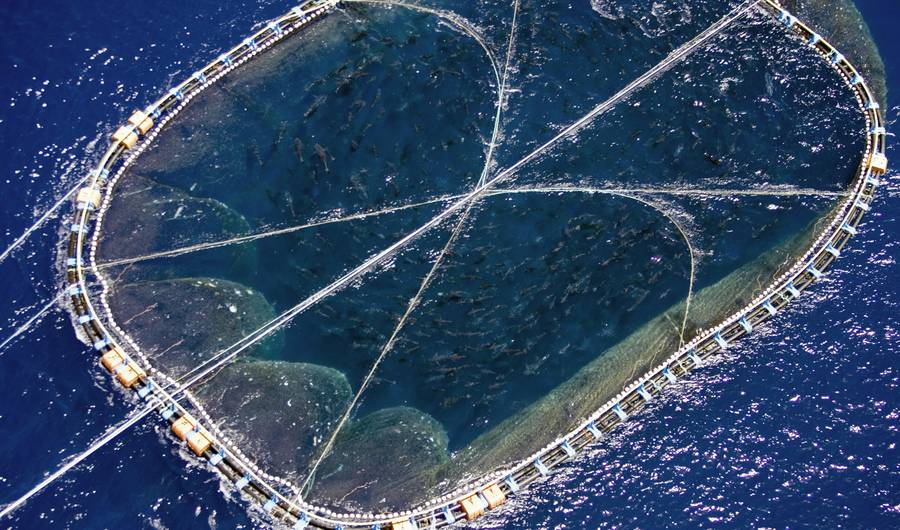 Bluefin tuna are, by nature, predators. And in the food chain, they keep the ocean balanced, going after schools of smaller fish and keeping them from overrunning the waters. Killing off a predator doesn’t sound too harmful for the environment. But when a top predator is knocked off from overfishing, it can create a butterfly effect, changing the ocean’s composition in ways we can’t know.

Almost all industrial plants function on fossil fuels, like the ones dug up at this oil field in California. 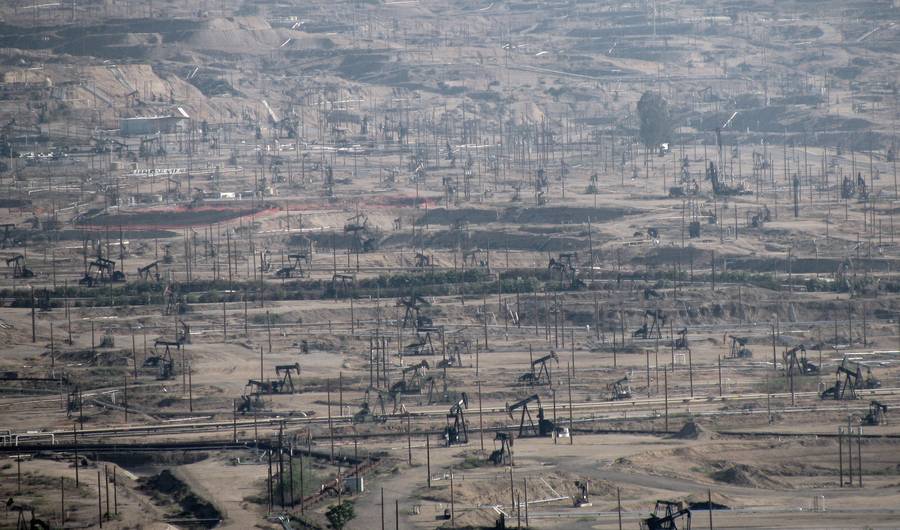 Even though humanity has been getting better about more efficient means of producing food, 85% of U.S. energy still relies on oil, coal and natural gas. But it’s not fueling trucks or tractors. It goes to producing chemicals. Five years ago, the U.S. Energy Information Administration estimated nitrogenous fertilizers, used for growing plants, accounted for 352 trillion Btu of natural gas for production. That’s a lot of drilling.

Fruits and vegetables are being grown in huge quantities. But they aren’t all getting eaten. 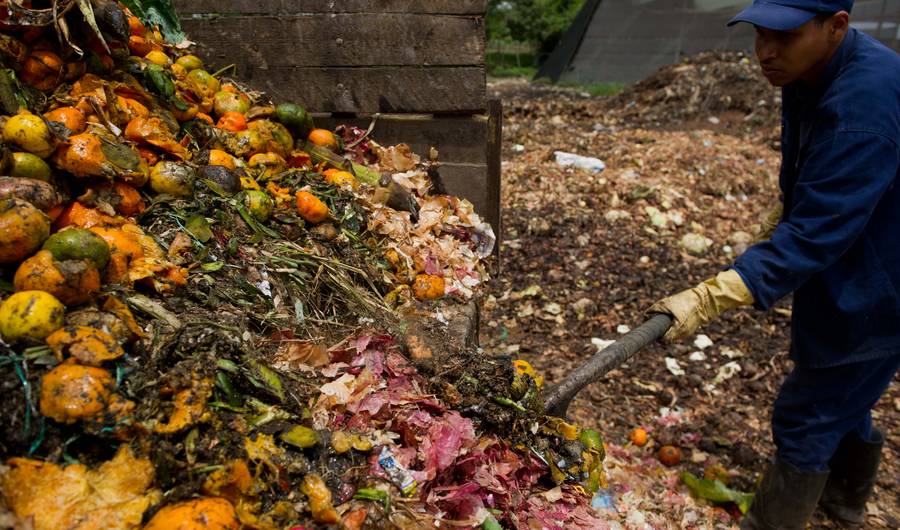 According to statistics from the United Nations Environment Program, the global community wastes 222 million tons of food annually. That means roughly one third of all the food coming from the Spanish greenhouses, the California livestock farms and everywhere in between doesn’t end up in a stomach. According to National Geographic, an typical family of four in the United States doesn’t use up to 1,160 pounds of the food it buys – averaging $1,484 going to waste every year.

Wasted meat, like the 600 tons a South Korean company had to incinerate, spoils and carries disease to other countries. 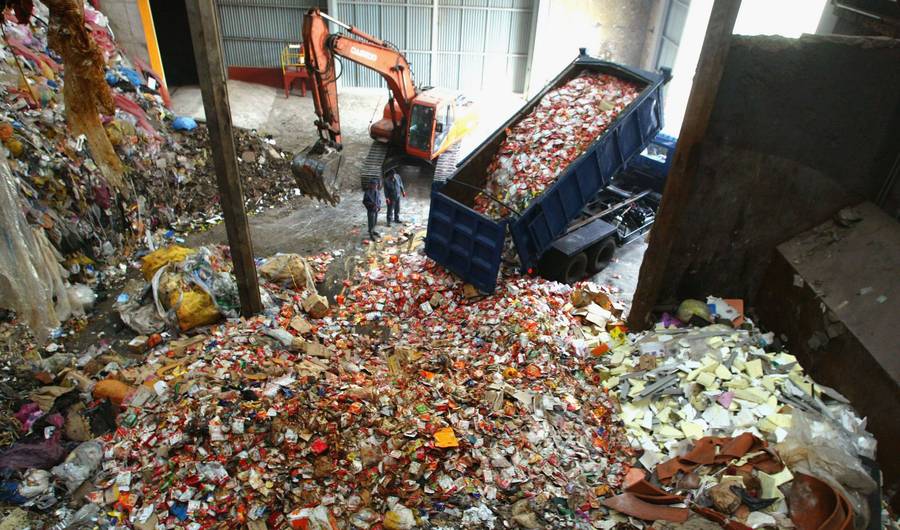 U.S. farms have had a few problems with diseased meat getting out to the world’s larger importing markets, not least of all in 2012 when a South Korean retailer had to put the kibosh on all U.S.-imported beef. Before that, a U.S. mad cow disease scare in 2004 led to a severe drop in the country’s then $4.3 billion beef export business, and around the world, importers who didn’t find out about the problem until it was too late had to find ways to dispose of the products. In Incheon, South Korea, that meant incinerating 600 tons (1,200,000 pounds) of raw meat.

Waste doesn’t always stay in its own country. Sometimes it ends up in massive garbage dumps, like this one in Haiti, which is over 200 acres. 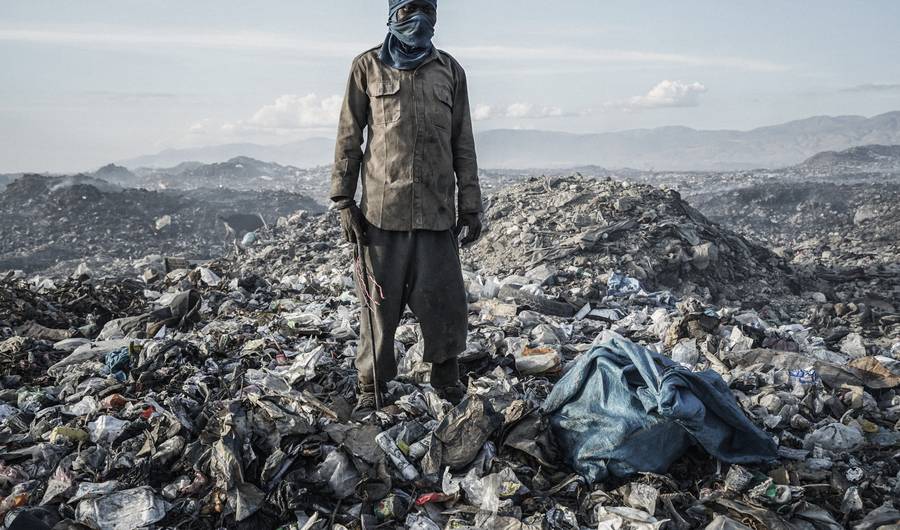 Whether from food or otherwise, it’s hard to know how much litter is actually created in the world. On New York City subways, an announcement politely informs riders that 1,443 tons of trash were removed from subway tracks in 2014. In the United States, 220 million tons of waste are generated every year, with over half ending up in landfills. And in 2012, it was estimated that the world’s population produced 2.6 trillion pounds of garbage – or as the put it, the weight of about 7,000 Empire State Buildings.

In places with poor or nonexistent waste management, the garbage gets eaten by animals, which in turn get eaten by people. 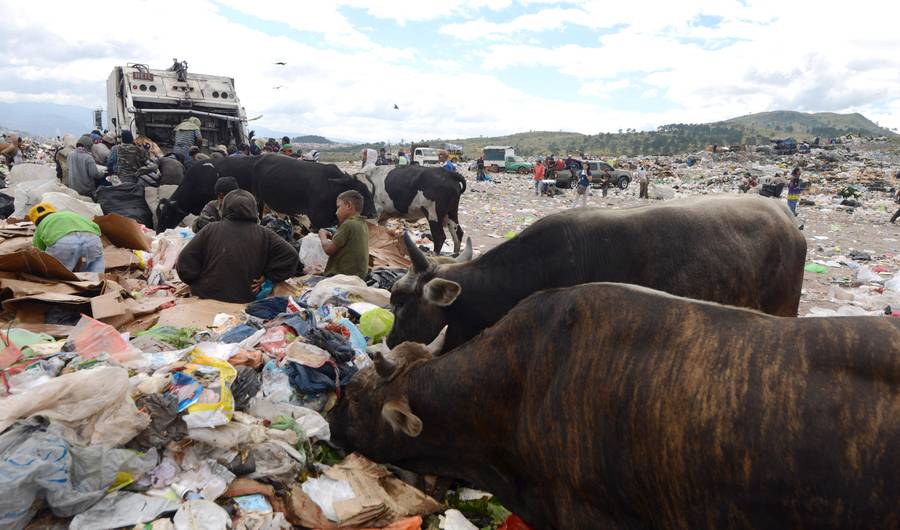 Depending on where you live, that 2.6 trillion number might sound high or low. For the people of Port-au-Prince, Haiti, where massive, 200-acre-plus dumps are scavenged for recyclables, it probably sounds right. Same goes for the electric waste dumps in Accra, Ghana, or the waste management program-less towns of Manila. For many people living in the U.S., we don’t have to witness all the waste piling up except on trash day. But it all goes somewhere.

But there are ways to approach agriculture differently for the sake of the planet.

Global moves are being made from different industries to keep us from starving and to learn to eat in less environmentally costly ways. That may be farming in our homes, printing our own food or engineering meat to take the incredible weight of raising cattle off the planet. But just increasing our technology dependence isn’t enough to save a planet ravaged by the people living on it. It’s time to pitch in.