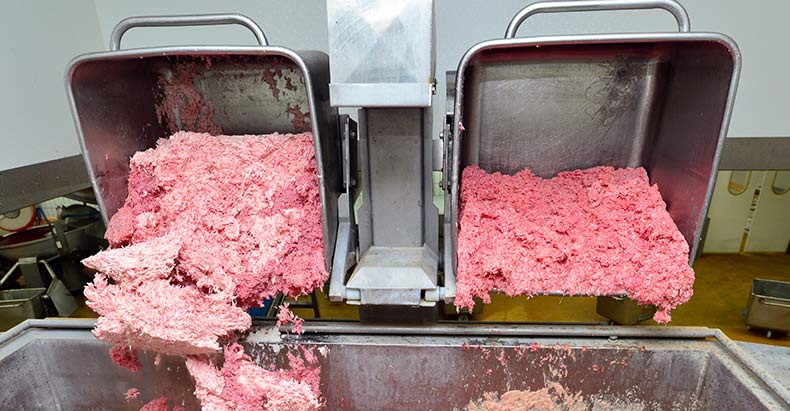 The megalithic federal bureaucracy known as the U.S. Department of Agriculture is made up of 100,000 employees who are stationed at 4,500 locations across the country. Their mission statement, in part, reads “to promote agriculture production that better nourishes Americans.”

A recent study by Consumer Reports, however, shows that nourishing Americans consists of feeding them deadly superbugs, food poisoning pathogens, and feces.

While it’s not surprising to the readers of the Free Thought Project that the US government could fail so miserably in their stated mission, this recent study exhibits an unrivaled level of incompetence within this behemoth bureaucracy.

Consumer Reports tested several hundred packages of ground meat from stores across America, and their findings were shocking, to say the least.

According to the report,

New lab tests conducted by Consumer Reports found that of the 300 packages of ground beef purchased in stores across the country, almost all contained bacteria that signified fecal contamination.

A significant amount also contained superbugs, bacteria that are resistant to three or more classes of antibiotics. A key reason is the overuse of antibiotics on cattle farms.

The irony here is that local organic farmers who have harmed no one, are being raided by SWAT teams for selling raw milk, eggs, or grass fed beef. Meanwhile, millions of people are getting sick and dying across the country by government-subsidized factory farms.

In The Omnivore’s Dilemma, Michael Pollan points out how concentrated animal feeding operations (CAFOs), are dependent upon the cost of corn remaining low.

The government ensures these low corn prices by throwing billions of dollars a year the top 1 percent of corn farms in the United States. Since 1995, a whopping $85 billion has been taken from taxpayers and given to corn producers; all of this so you can have poop in your burger.

Aside from the horrific results of feeding corn to cows, there is also the apocalyptic problem of creating superbugs by massively dosing the factory farmed cattle with antibiotics to counter the horrendously dirty conditions in which they live.

“That practice (heavy use of antibiotics) can lead to the creation of antibiotic-resistant bacteria, a major public health problem. If you get sick from these bugs, your infection can be difficult to treat,” said Urvashi Rangan, Ph.D., director of Food Safety and Sustainability at Consumer Reports.

The consumer reports study wasn’t all doom and gloom, however. When they tested the sustainably produced, antibiotic-free, grass-fed cattle, they found that these were far less likely to have any of the bacteria.

“This study is significant, because it’s among the largest scientific studies to show that sustainable methods of raising cattle can produce cleaner and safer ground beef,” Rangan said.

Of course, “big government beef” is upset and defensive about these findings. When consumer reports contacted the National Cattleman’s Beef Association for a statement, they received this single comment from Kansas State University professor Mike Apley:

If all cattle were grass-fed, we’d have less beef, and it would be less affordable. Since grass doesn’t grow on pasture year-round in many parts of the country, feed lots evolved to make the most efficient use of land, water, fuel, labor and feed.

Amazingly enough, however, farmers can sustainably raise organic cattle to meet the market demand, without using government subsidized corn. Instead of massive amounts of chemical and mechanical inputs, the organic farmers can plan for the harsh winter months by saving the surplus from summer months.

The good news is that the demand is shifting from factory farmed cattle to sustainable and humanely raised cattle. Despite the best attempts of the USDA to regulate sustainable farms to death, they are thriving as demand increases.

Even some fast food chains are adopting this sustainable method. In December, California-based quick-service chain Carl’s Jr. rolled out the All-Natural Burger, which sources solely grass-fed beef from Austrailia.

Besides Carl’s Jr., a grass-fed burger chain called Farm Burger, has begun to spring up from coast to coast.

Besides sustainable beef, there is also the option of no beef. One of the fastest growing categories in food choice happens to be vegetarian.

In the information age, ignorance is a choice, and it seems that it’s a choice more, and more people are avoiding. While this study shows that we still have an uphill battle when it comes to healthy, non-taxpayer subsidized food, it is only a matter of time before we reach critical mass.