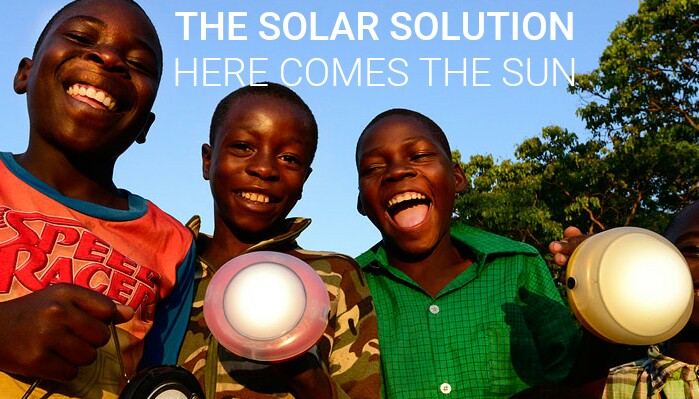 As technology and resources start to reach more remote parts of the globe, we face a stark reality. Will the remote folks of Africa, Latin America and Asia follow in the same unsustainable footsteps as the West? Or will they be insightful enough to realize there must be a different way, one that preserves all life on this planet.

Using a unique business model to sell solar lights in rural African off-grid communities, SolarAid aims to eradicate the dangerous and toxic kerosene lamp from Africa by 2020. Working in Kenya, Malawi, Tanzania, Zambia, and Uganda, the lives of over 10 million people in Africa are being improved through solar technology.

“The light has changed our life. My kids eat well, study well and we are a happy family now,” said Dickson Murumbi, a teacher in Kenya.

“The First and Most Crucial Step on the Energy Ladder”

“A clean, affordable and better source of light,” said SolarAid CEO Andrew Webb, “is the first and most crucial step on the energy ladder.” Webb continued, “The benefits to families, schools and communities is truly staggering and the fact that 10 million people in rural Africa, as we speak, are using these lights is testament to the hard work and dedication of our SunnyMoney teams.”

The total number of people across Africa now benefiting from solar light is estimated at around 50 million. As the largest seller and distributor on the continent, SunnyMoney solar lights account for one fifth of all sales. Webb pointed out, “The off-grid sector reaching 50 million people is fantastic, but there are over half a billion people in Africa still reliant on dangerous and very poor light sources like kerosene. In 2015, this is simply not acceptable. We need more support so that we can continue to give people across the continent the chance of a brighter future.”

The Dangers of Kerosene Lamps

Releasing black carbon into the environment, kerosene lamps pollute the air inside homes, resulting in health problems such as lung and eye diseases. Not only producing dim light which is inadequate for work or study, wounds and fatalities often result from the open flames of kerosene lamps.

In Uganda alone, the International Energy Agency estimates that 30 million people, or 80% of the population, live off the electrical grid. “Electricity is only available in the cities and main towns,” explained Alison Gallagher, SunnyMoney Uganda Operations Director. Gallagher added, “This forces families living off-grid to spend an average of USH 15,000 per month on kerosene for lighting.” Kerosene costs account for up to 25% of a family’s monthly income, and Gallagher pointed out that this money could be better used “to improve household nutrition, pay school fees or put towards new business opportunities.”

Across the African continent, it is further estimated that over 600 million people do not have access to electricity. With a total population of nearly one billion, it is reported that there are likely 100-200 million kerosene lamps damaging the health, polluting the air, and wasting the precious money of families in rural African off-grid communities. From my own personal experience as a resident of a rural community in Egypt, that number is vastly underestimated, as kerosene lamps represent the standard light source during the frequent power outages that we experience here.

SolarAid and SunnyMoney Shines in Africa

Based in London, SolarAid is an international charity that believes in business-based solutions to poverty and global warming. Creating a social enterprise called SunnyMoney in 2008, SolarAid relies on SunnyMoney to run its on-the-ground operations in African nations.

Testing and selecting the best solar lights and products from quality manufacturers, SunnyMoney began selling the solar lights in 2009. At that time the number of solar lights in use around Africa was estimated at fewer than 40,000. But by creating demand, solidifying markets, and bringing a commercially viable and scalable solution to this market, sales have begun growing all across the continent.

“We are product neutral which means we only sell lights that meet customer’s needs,” states the SunnyMoney website. “All of our lights exceed the Lighting Africa World Bank standards and come with a warranty. You can count on our SunnyMoney service guarantee of high-quality products with the best possible prices.”

The Benefits of Replacing Kerosene Lamps with Solar Lights

Replacing kerosene lamps with solar lights not only mitigates global warming – it also offers comfort to anxious mothers. “I don’t have any worries with the risk of the kerosene to spill and burn the house, because solar is easy to use and the children can put it on without me around,” reported Victoria Materu, a mother in Tanzania.

The benefits of one solar light include:

Through numbers and research offered by SolarAid, combined with research from the Global Off-Grid Lighting Association (GOGLA), the following figures highlight the benefits of replacing kerosene lamps with solar lights:

Furthermore, this research concludes the following, based on the lifetime of a solar light:

“Using SunnyMoney solar lights,” reported Stanley Ruget, a Head Teacher in Kenya, “the school has improved from a mean score of 227 to 247. Most students use their solar light to study til midnight.”

Placing a greater emphasis on knowledge sharing, SolarAid recently made a Clinton Global Initiative commitment to “build the alliance to eradicate the kerosene lamp.”

According to SolarAid, off-grid lighting is the most cost-effective way of contributing to the United Nation’s Sustainable Energy 4 All goal of universal energy access by 2030. The charity is currently advising a number of organizations on entering and supporting the off-grid lighting market, and is a leading member of the Global Off-Grid Lighting Association(GOGLA).

As of December, 2014, GOGLA estimates that around 7.52 million lights have been sold throughout Africa. Additionally, with the inclusion of home solar power systems and accessories, GOGLA estimates the off-grid solar market sector to be worth around $50 billion.

Improving Lives While Reducing Impact on the Planet

As SolarAid CEO Andrew Webb noted, “The growing off-grid solar market is a beautiful example of how we can reduce our impact on the planet and improve the lives of those living on it at the same time”.