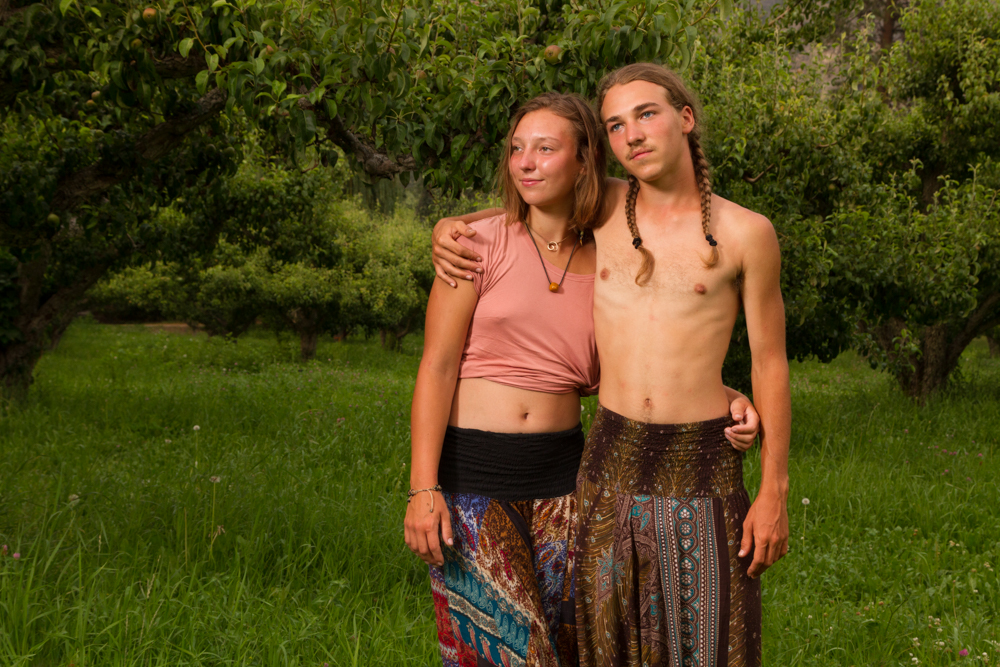 It was a swelteringly hot day along the sun-scorched banks of the Similkameen River in southern British Columbia. Forest fires burned to the north and south, creating a grungy orange haze over the entire valley. I sat on a log, stoned off my face, plucking a banjo and watching a pack of stray-looking dogs frolic in the water below. It was here at the ramshackle campsite of Dusty and Dusty (two BFFs, both named Dusty) that I’d posted up for the afternoon to drink warm beer and mingle with a community of transient fruit pickers in Keremeos, BC.

Patrick. All photos by the author

My dad escaped to Keremeos 15 years ago to become an amateur farmer and pursue his dream of living a neighbourless life. For as long as I can remember, my visits to the Ol’ Man’s place have consisted of crucial daily trips to the liquor store and participating in the weekly meat raffle at the Veteran’s Hall. On this particular trip however, during the first week of July, I thought I should break this thrilling routine and actually do something.

Most commonly remembered as “that place we stopped for gas,” Keremeos is renowned for its lush orchards, sprawling vineyards and abundance of fruit stands. Each one painted and decorated more cartoonishly than the next, by what could have been the set designers from Sesame Street. More memorable than its colourful and fruity main drag are “The Pickers”; the dreadlocked, glazed-eyed, thumbs-out seasonal labourers that swarm the town in the summer. Mostly Québécois, these itinerant hippies hitch-hike from far and wide, looking to make some cash and score sweet BC bud.

I set out on Tuesday morning, schlepping my camera gear and a case of Cariboo Lager with the goal of making some new friends. By noon it was 33 Celsius as haggard and exhausted pickers were making their return to the riverside campground following their 4-11AM shifts in the orchards. The first couple I met introduced themselves as “Lux” and “Bear”. Both from Montreal, they had been making pilgrimages to Keremeos for years, picking fruit and selling art out of their van. Lux (who I kept calling “Jet” by mistake) had just gotten a new tattoo on her back-an intricate pink tree that weaved it’s way through several rings and orbs. She explained that it was designed to help keep her chakras aligned.

I continued trekking through the campground amongst a fluorescent scattering of tents and hanging laundry. Soon I arrived at what appeared to be the “downtown”, a big open space with a large concentration of people milling around and enjoying chill activities. To my left was the “Italian District”, a cluster of shaved-headed pickers, some strumming guitars, others carving sticks. The local hash dealer, a teenager of ’70s Ozzy Osbourne resemblance, zipped by on a rusty children’s mountain bike making deliveries and taking orders. Beneath a tarp to my right, a stick n’ poke tattoo marathon was taking place. I spent the rest of the afternoon taking portraits while getting sunburned and reasonably faded. And despite my clean clothes and recent haircut, I tried to blend in.

The following day was spent cruising the scenic back roads of the valley and offering a complimentary taxi service to anyone in need. To and from their respective camps or the town hotspots (the laundromat, the beer store, the free WIFI-having nook in the alley behind the library), I shuttled truckloads of pickers of a kaleidoscopic variety. From the cherubic 17-year old sporting a Pokemon tank top and bedazzled neon skirt, to the Wiser’s Deluxe-stinking gutter punk whose home was under a highway overpass, the characters were fascinating and endless. The enormity of the scene and collective spirit of these sorta-ambitious fruit hustlers made me realize that the significance of Keremeos was far greater than I’d originally thought. It dawned on me that this must be the Woodstock or the Coachella of fruit picking, and right now cherry season was the headlining act.

That evening I drove out to River Valley Farm, a small organic orchard in the hills east of town. I’d planned to reunite with an eclectic crew of hyper French-Canadian teenagers I’d met earlier that day. At the time, being the people-person that I am, I cleverly wrote all of their names on my hand for future reference: Félix, Gabrielle, Leo, Tristan, Godfrey, Guillaume, Kiki, Félix 2, Charlotte, Patrick, Daphne, Vern.

River Valley Farm was a slice of heaven. The pickers had been assigned their own rustic bunkhouses, lined up in a row along the quiet grassy shore of the river. As the sun went down, the sky turned a hazy flamingo hue. The Frenchies enthusiastically took turns in front of the camera, maintaining their cool between fits of arm-flailing, mosquito-killing rage. After dark, I continued to resurrect my French skills following an invitation to hang out and play a drinking game called “Buffalo.” In a few short hours, it would be 4 AM and the pickers would be back to the grind, climbing ladders and filling tubs. While some retired to bed, most of us stayed up taking shots, skinny-dipping, and making up freestyle raps.