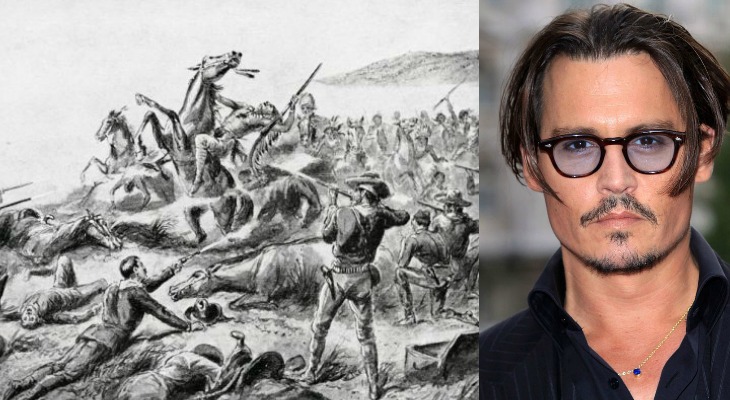 Actor Johnny Depp wants to purchase the historical landmark Wounded Knee and gift it back to the Native American people to help make right what went so wrong in 1890. by Amanda Froelich

In an interview with The Daily Mail on Sunday, well-known actor Johnny Depp disclosed that he intends to buy Wounded Knee, a national historic landmark, and gift it back to the Indian people. He shared that he is ready to spend millions in order to give control back to those that should have inherited the land, and help make right what went so wrong back in 1890.

“It’s very sacred ground and many atrocities were committed against the Sioux there,” he said. “And in the 1970s there was a stand-off between the Feds (Federal government) and the people who should own that land. This historical land is so important to the Sioux culture and all I want to do is buy it and give it back. Why doesn’t the government do that?“

Perhaps it was Depp’s stint playing the role of Tonto in the box office production The Lone Ranger that inspired him to pursue such action; whatever the inspiration, the activism will most certainly be appreciated by many.

Depp spent a massive amount of time doing research about the various tribes and received the approval from many Native American groups before the filming of The Lone Ranger began. His respect for the Native American culture runs deep, and he wanted to make sure that all those involved with the production were doing right by “the Indian” in the way they portrayed the various tribes.

“The idea was to give back to them and to make sure that we got it right,” he said in the lengthy interview. “This picture of the Miniconjou Sioux band was taken near the site of the Wounded Knee massacre one month before the December 1890 massacre where hundreds of Indians were killed.”
Credit: Corbis

According to the news source, Depp is intent on following through with the aforementioned plan. The asking price for Wound Knee is $3.9 million, which is a fraction of what Depp makes from one production. That said, there is little standing in the way of him keeping true to his promise.

“I am doing my best to make that happen. It’s land they were pushed on to and then they were massacred there. It really saddens me,” he stated.

The area near Wounded Knee Creek on the Lakota Pine Ridge Indian Reservation (in South Dakota) is where the last major battle of the American Indian Wars took place. The fight reportedly began when an elderly tribesman refused to hand over his weapon. Troops attacked, and at least 150 members of the Lakota tribe – including men, women, and children – were killed.

Honoring the Native American culture by purchasing the historical location will be a major step in helping to make right what went so wrong over a hundred years ago. The event has caused outrage from historians as at least 20 American soldiers were awarded the Medal of Honor for their role in the massacre. Now, at least, the public is more educated on the solemn history and can do what’s right moving forward.