Coderre was joined by mayors including Laval and Longueuil who make up the Montreal Metropolitan Community.

“We are against it because it still represents significant environmental threats and too few economic benefits for greater Montreal,” said Coderre.

The announcement follows extensive public consultations the organization did last fall, he said.

​The City of Montreal’s official opposition is the latest challenge to TransCanadaCorp.’s proposed pipeline project, which would carry 1.1 million barrels a day of oilsands crude through Quebec to an export terminal in Saint John, N.B.

The project would include the existing TransCanada pipeline as far east as Montreal plus a new pipeline through Quebec. 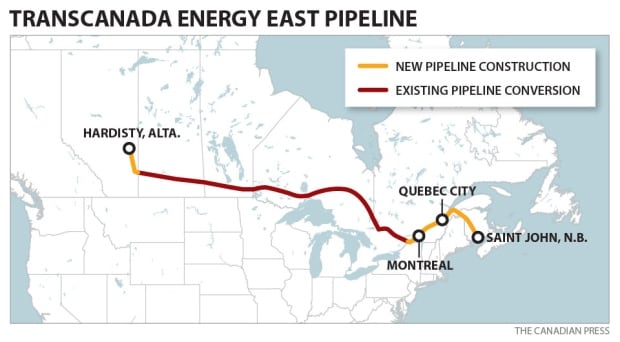 Coderre has voiced concerns about the project in the past, but until now has not taken an official position on it.

Laval Mayor Marc Demers said in September that he is “firmly against” the proposed pipeline.

Earlier Thursday, Energy East spokesman Tim Duboyce said the company will wait to see precisely what the mayors have to say and take it from there.

“We see this as an opportunity to have a document to help lay out what those concerns are so we can continue to consult with elected officials and other stakeholders,” he said.