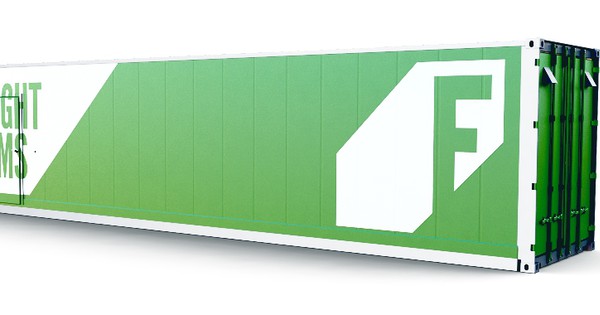 These shipping container growing units from Freight Farms feature high-density vegetable & herb production, and include everything needed to go from seed to table, year-round, in a fraction of the space as a conventional greenhouse.Ideas for methods of growing more produce in and around urban areas, close to where the food will be consumed, come in all sorts of shapes and sizes, but one shape in particular keeps popping up in urban agriculture, especially when it comes to year-round growing and cold climates. Shipping containers (also known as intermodal freight containers), while probably not the first thing to come to mind when it comes to growing vegetables, are a great choice for upcycling and repurposing for urban farms, because they’re affordable, readily available, and built to last for decades, and with some extensive retrofitting, can be used as climate-controlled indoor farms.

I recently covered the CropBox, which boasts of being a ” farm in a box,” but long before that shipping container farm made the news, Freight Farms was building their own high-density growing units inside cargo containers, thanks to a successful crowdfunding campaign run in 2011. Since then, Freight Farms has continued to develop and improve its urban farm units, dubbed the Leafy Green Machine (LGM), which uses high-efficiency LED lighting, vertical hydroponic growing towers, and an automated climate-control and irrigation system to grow thousands of plants inside a single 320 square foot container.

The Freight Farms design is based on a conventional insulated shipping container measuring 40′ x 8′ (~12.2m x 2.4m), but are extensively retrofitted to serve as a micro-farm that can grow some 4,500 plants at a time. The rows of plants are grown vertically, with the LED lighting strips between them delivering “the optimal wavelengths for uniform plant growth” and the hydroponic system supplying the nutrients that the plants need, directly to their roots, using 90% less water than conventional growing does.

And not only do the units grow mature crops, but the LGM also integrates a dedicated germination and seedling station (also using LED lighting and hydroponic irrigation) that can handle up to 2500 plant starts, which then get planted into the growing towers a few weeks after sprouting. This aspect of the LGM is probably one of the most essential elements for a production farm, and one that isn’t so obvious to non-farmers, as it enables the growers to start seeds and continuously feed those seedlings into the system for regular harvests, all within the walls of the shipping container.

According to the Freight Farms website, these “smart farms” (so-called because they can be controlled via smartphone) also offer another advantage over outdoor growing and other open systems, because the use of a sealed container for growing can “eliminate the need for herbicides/pesticides.” The LGM system is also considered to be modular and scalable, as the shipping containers can be securely stacked on top of each other for increased production in the same physical footprint as a single unit.

By enabling year-round growing, even in cold climates, each of these 320 square foot containers are said to be able to produce an acre’s worth of food each year, and could be a viable option for the urban farm entrepreneur. The cost of a unit isn’t cheap ($76,000), and there are other costs associated with operating one (estimated to be about $13,000 per year for electricity, water, and various growing and packaging supplies), but considering that the LGMs are considered to be capable of producing yields of locally-grown produce “at commercial-scale in any climate and any season,” they might be a great business investment for the prospective urban farmer.

Find out more at Freight Farms.