The Gowanus Canal in New York City is notorious for being one of the most polluted waterways in the U.S. Imagine everyone’s surprise when, three weeks ago, an oasis of pure greenery sprouted atop the surface of the river.

Not only is this improbable garden a breathtaking sight on the brackish water, but it is also cleaning the stream as it blooms.

The project, called GrowOnUs, is an experiment in “floating infrastructure” that utilizes a process called phytoremediation to tidy up the murky canal. Over 30 different kinds of plants act as sponges to purify, desalinate, and mitigate the chemicals affecting the waterway. The plants are grown inside the very same metal culvert piping used to carry sewage waste into the waterway. These “test tubes” are made buoyant by eco-friendly construction materials like coconut fibers and bamboo.

Balmori Associates, a New York company specializing in creating environmentally sustainable infrastructure since 1995, took action on the GrowOnUs project after receiving a $20,000 grant from the Cornelia & Michael Bessie Foundation.

According to Diana Balmori, three attempts had already been made to produce a sustainable patch of vegetation in the waters, but the pollution had been too much for the plants. Now, since using tougher, more conditioned greenery, the garden has been thriving. 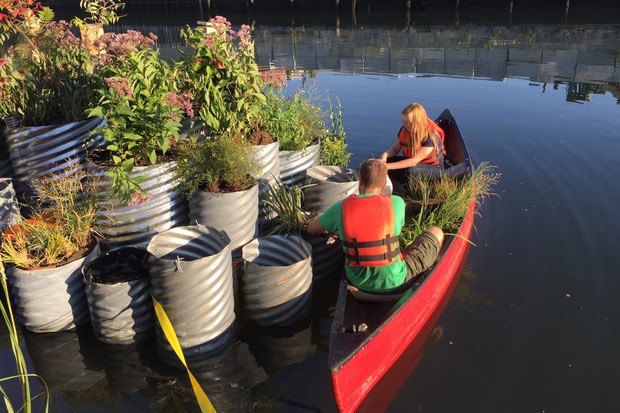 GrowOnUs, ideally, will deliver a positive change in shoreline protection, wildlife activity, and financial income for the city. It could also become the next wave in locally-grown food.

“We have pioneered floating landscapes, we now want to learn what can make these floating structures financially sustainable” said Balmori in a press release. “Dr. Michael Balick at the New York Botanical Garden suggested we grow herbs, low maintenance crops.”

“In a few years NYC restaurants may be serving meals and drinks infused with herbs [and fruits] grown on one of these islands.”

(WATCH the video below to learn more)