COP21: Talk is Cheap – Why I’m Skeptical of The Paris Climate Talks & You Should Be Too

Having been in Paris for 2 weeks at COP21- ground zero of the negotiations of a climate deal that involved close to 195 nations from around the globe- so many of us in attendance are enormously disappointed with the results.

While many are celebrating this as an historic moment – I believe it might be one for the exact opposite reason that everyone else believes it’s some kind of turning point. We may have just witnessed an historic failure.

There is no truly binding agreement to actually hold countries to the targets and actions set by the deal, despite the fact that we are running out of time to make these changes. I mean the Kyoto climate agreement also was “historic” which went right down the tubes as many countries ended up backing out and not sticking to it whatsoever…

The only binding rule is that countries have to legally monitor their emissions in an effort to hopefully peer pressure countries into compliance.

Wow. Great! Now we are going to use peer pressure as the main mechanism to getting countries to comply while a large anvil dangles over the fate of humanity. Pardon my lack of enthusiasm towards the status quo puppetry while our planet continues to be poisoned by our idea of “progress”.

Overall it felt like a giant masturbatory PR stunt in every sense of the word.

From many of the “solutions” being directly and visibly funded by known evil-doing corporations (the presence of fracking corporations was unreal) – to most of the speakers at various events all being representatives of the biggest donors to those events- it really lacked a lot of elements that allowed things to go off script. There was rarely ever Q/A sessions at these events as public involvement seemed to be an after thought more than anything.

I kid you not, the first day in Paris during breakfast we were handed a book titled “Why Environmentalists Are Wrong About Nuclear” – Seriously?!

It made me feel like everyone was drinking the kool-aid.

COP21 was a giant self indulgent gathering of bureaucrats, politicians who feel remorse and guilt for their inaction in the past, the media who were simply looking for the next big clickbait headline to increase their ad revenue and help them pump out hyped up propaganda of promises, and corporations invested in nothing green minus the greenwashing of their image.

Everyone (Government, Media and Corporations) was too busy taking selfies with the general feeling of “look at me being a part of the solution,” and spending more money and resources letting people know they were at COP21 than they ever have on real tangible change or projects.

A giant carrot hanging on a stick and a huge political photo-op, Plenty of people were saying what they will make happen by 2100- most of which focused on fossil fuels, oil, and gas- but none of which covered ENORMOUSLY important systematic symptoms that have led us to be in this position in the first place.

My gut tells me this is a lot of “show and tell” because unless there is a real cost put on pollution then this is no different than Coke’s promise to give 2 million to “save the polar bears” over a 5 year time span all the while spending MILLIONS MORE letting you and I know about it without changing their product or processes which contributed to environmental disaster in the first place. 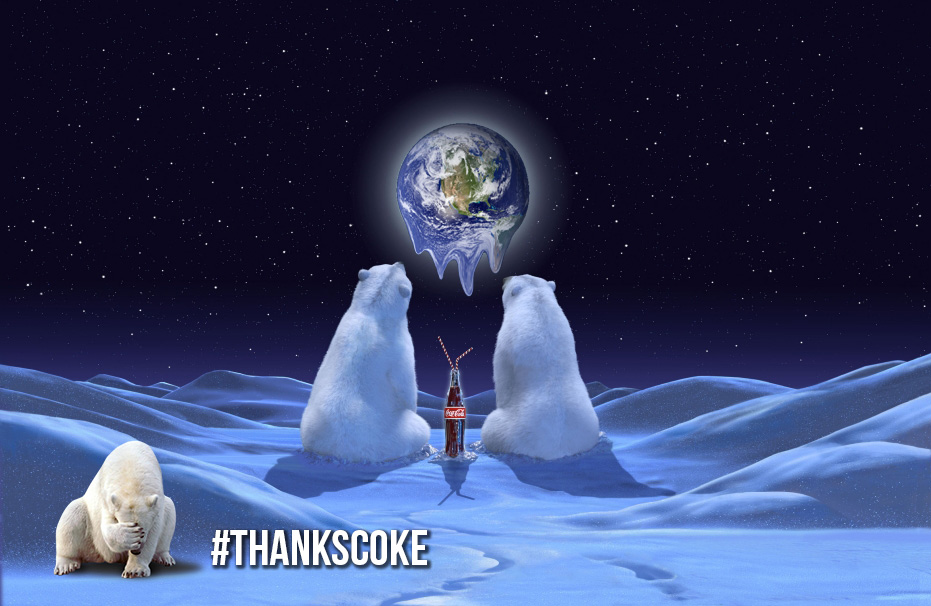 I can hear the crowds of people freaking out right now…

Do you propose a tax/penalty on pollution?
Yes I do ladies and gents.

IT’S THE ONLY METRIC CORPORATIONS LISTEN TO.

If you affect their bottom line directly you will see them do what they have to, but unless the economics of solar energy outweigh the economics of fossil fuels we AREN’T going to see change unfold. There needs to be a firm and growing price of doing wrong by the environment and although I will agree that there is no price tag that applies to nature, there does have to be one that applies to corporations who pillage our planet…

But wait. Does that mean we will pay more taxes?

Yes it does – and we should. If we are going to consume goods that pollute the world then we SHOULD be paying more for them. We have to use humanity’s greed and love for money for a good cause.

This IS NOT some illuminati new world order suggestions here stuff folks – this is simple solution that swims with the current of the stream versus against it. Trust me, it’s not my ideal solution either, but it really is the best most immediately effective way.

Now don’t get me wrong…

There were tons of great people there; amazing speakers and initiatives that deserve all kinds of praise and a louder voice, but allow me to give you a bit of context as to why this is enormously concerning to me.

I went to COP21 to explore and keep my eyes and heart on the pulse of what is happening surrounding the environment today. To amplify the voices of true change makers which to me lie in the grassroots stories of tangible change and action being done by groups around the world to truly empower themselves and their communities.

It doesn’t matter if you believe in climate change- there is ZERO argument about the devastation this planet is facing due to the disconnection we have from the earth.

In fact, I believe we are still very much on the path towards the 6th mass extinction event on Earth, and this video conveys just how urgent this crisis is.

Now here is the thing…

All those statistics in this video are projections of our planet and all point to some HUGE consequences that will occur well before 2100- or for the selfish sides of our psyche – IN OUR LIFETIME!

This isn’t some far distant threat or something we can go about lightly, yet the first status check up on any of these agreements will be held in 2020. That means we are 5 years away from knowing whether or not anyone is even coming close to sticking to these targets.

Although I would love to believe that hitting a 1.5 degree target is possible – what I can tell you is that NOTHING in the current agreement gives realistic hope for such.

HUGE fundamental topics were ignored during these talks and thus the only success that COP21 had was in the same way things like alternative events like #EarthToParis or large rallies create:

An opportunity for the grassroots to gain strength and come together – connect and collaborate.

The coming together of otherwise disconnected tribes makes for much louder and more powerful storylines to be heard – as well as an opportunity for more people to tangibly put their time into change.

People like Bill McKibben, Noami Klein, Dr. Vandana Shiva, the activists and many more stand out to me as being the real heroes of these talks well beyond what went on at the official meetings. The grassroots really showed up strong and for that I’m proud.

The solutions are simple.

All this being said I am still hopeful…

As per usual we cannot wait for governments and corporations to build the world we know is possible in our hearts.

You, me and the rest of us need to do more, period. This might seem frivolous and sad but au contraire it’s actually quite empowering.

Our future belongs to us if we make small yet impactful lifestyle changes surrounding what we do in our own lives and homes each and every day.

If we were wiser we would recognize that it is now time for us to adopt the wisdom we have been granted over the years and thus it isn’t for nothing that Valhalla has now launched WISDOM to do just that.

In short we are building an off grid school at Valhalla Montreal that will teach people the tangible skills for philanthropreneurs and eco warriors to step up and learn exactly what it takes to change the world one fruit tree, solar panel, lifestyle change and movement at a time…

Click through to Valhalla’s Sustainability Learning Centre for more details…