Consider that a simple Google News search of the term ‘climate change’ brings up a litany of articles on how a disaster is linked to the phenomenon, or how known consequences are actually worse than initially thought [13]. The basic point of these articles -and the daily message provided to the public- is that

Environmentalists raising this alarm intend for their messages to galvanize the public, engender social reform and a progressive set of policies—but they have had the opposite impact.

What we environmentalists have lost sight of is that a cause for social and political reform progresses on the solidarity and unwavering belief of the millions who fight for it.

Remember the conviction with which millions mobilized during the Civil Rights Movement?

Remember the electric fervor that gripped nations around the world to secure equal rights for the LGBT community?

Environmental protection is no different, and our approach to winning the battle for our species and our ecology should be inspired by the leaders of other causes for justice.

If we are to achieve the admirable and necessary goals of environmentalism, we must be willing to reflect, and be willing to reframe the message we offer the world. Successful social justice movements carried a message of hope and possibility despite the fear and consequences. It is hope, not fear that motivates people to dedicate themselves to an ideal. And shaming the very people who must rally to our cause creates backlash and widespread rejection of the issue’s value—this is not a conditioned response, but part of our psychology.

Groundbreaking studies in behavioural psychology found that as humans, our ability to remain optimistic and capable of solving problems is diminished when we are constantly pondering our wrongdoings [14]. And while remorse can be a force for constructive attitudes [15], it requires us to believe that we are indeed able to change for the good—this is called perception of self-efficacy [16].

The most compelling findings related to self-efficacy show that when we are shamed for our actions, our perception of self-efficacy flat-lines, producing a coping response that ranges anywhere from aggressive rejection to passive avoidance, neither of which advance social reform movements!

Taken together, this means that when environmentalists constantly present the catastrophe of climate change to the public in a confrontational manner, not-so-subtly [17] shaming people for their behavior or skepticism, they are delivering the perfect recipe for defensive response, or inaction. We have, despite our best intentions, actually found the best way to alienate the very group we are trying to win over. The public either becomes desensitized and shuts off, or entrenched in rejection and denial.

The narrative of climate change that we have offered to the world has played a pivotal role in the political and social inertia that plagues the environmental movement today.

Society does need to take responsibility and be accountable for the damage it has caused, and that begins with environmentalists taking greater responsibility for the impact of their message. Accountability only means something if we are allowed to believe that we can change for the better.

History supports that messages of hope, possibility, courage and celebration have done far more to advance the causes of equality and justice than those of despair, fear and calamity. Without a doubt, the Civil Rights Movement rose in response to the violence of racism and discrimination in the United States. But Dr. King Jr.’s rhetorical prowess was not in his uncanny ability to define these horrors and project them to the millions who followed his lead; it was his uncanny ability to instill hope, courage and optimism in the public that ultimately changed the course of history. People were quite aware of the consequences of inaction, but their ability to remain optimistic was not disabled by a constant message of despair—they were empowered to believe that they could effect change. And that is why they did. 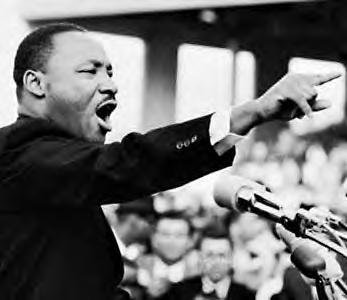 The idea of changing the narrative from one of despair to one of hope and celebration has also been used in the LGBT Rights
Movement. The LGBT community has won numerous battles around the world—landmark rulings that would have seemed impossible less than twenty years ago when erstwhile President Clinton signed the Defense of Marriage Act into law. The key message of this movement and its prominent thinkers right from Harvey Milk to Brenda Howard was the celebration of diversity despite the menace of discrimination. Once again—celebration and hope, not fear and guilt.

We need to learn from other movements. People want to do right by nature and avert disaster—our role must shift from contemptuous informant to empathic enabler. We have only succeeded in scaring and guilt-tripping the public into fighting for climate justice. I am convinced that hope and courage are stronger motivators. We must change the narrative of the issue, as New York University law professor Bryan Stevenson points out [18], from guilt and shame to one of courage and possibility. Canadian environmentalists David Suzuki and Holly Dressel have made exemplary attempts at this approach with their book More Good News [19].

In 2010 I was part of a grassroots and legal campaign to stay the construction of over 300 hydroelectric dams planned along the Ganges River in India—these dams were not only planned in precarious seismic zones, but threatened to devastate a river that over 800 million people consider holy. When the projects were withdrawn [20], it was not the scientific evidence or the public interest litigation filed that turned the tide—instead, it was the message of Indians young and old who were taught by their parents to revere Mother Ganga; it was the idea that this river was a nation’s artery, flowing with its identity and its character; it was the belief that the river gave life and liberty to millions who drank freely from its banks and irrigated their lands with its streams.

My experience in this microcosmic reform movement has challenged me, as an environmentalist, to be more mindful of how I communicate the message of environmentalism to the world. In reframing the idea of environmental protection as one of hope and empowerment, we do not ignore the gravity of the situation or the damage already caused—instead we allow citizens to believe in their ability to effect change, and respond to crises with determination.

The new narrative on climate change is one of celebrating our relationship with nature, responding to ecology with compassion and humility, using our awareness about what is at stake to foster a sense of respect for the environment, and being hopeful that we can use both technology and policy to harmonize with those processes that make human life possible. This is a necessary condition for social reform, and this is how we stand a chance of achieving climate justice.