She is teaching breathing techniques via Skype to someone she met online a few minutes ago.

A sales person during the day, Maritza moonlights as a breathing coach, helping people with health issues such as anxiety and stress.

She has had professional yoga training and could be charging about £30 per session. It would probably not be hard to find customers.

But Maritza is not receiving any Brazilian reais, dollars or pounds. Instead, she is being paid in a virtual currency called Time Money.

She is one of almost 100,000 users of Bliive – a Brazil-based website that brands itself as the world’s largest online time-exchange platform.

Bliive looks and feels like a social media platform. Its users trade services, including guitar lessons, air conditioner repairs and tarot card readings, without any cash or credit card transactions.

For each hour of service provided, the user receives Time Money, with which they can buy another service.

Maritza earned almost 40 hours’ worth of Bliive services. With that much Time Money, she was able to create her own website about breathing techniques, including her own branding.

“I am told that paying someone to do your own website is not cheap,” she says.

“But I was able to do it all by finding on Bliive others who would help me.”

Each person offers their help in one-hour chunks, and people who have “exchanged” Time Money can rate and review the quality of the service provided. 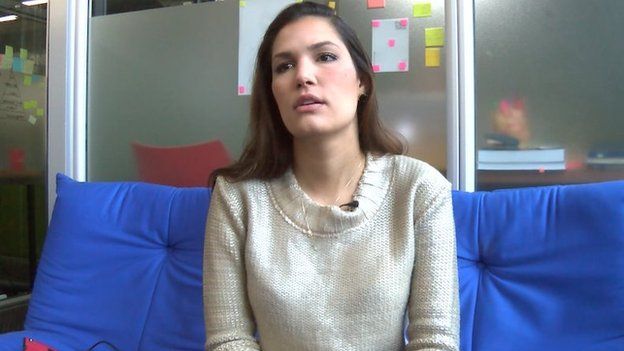 Bliive was founded a year and a half ago by Lorrana Scarpioni, 24, a public relations student.

She now employs a team of about a dozen people in Sao Paulo.

She came up with the idea after watching documentaries about the sharing economy and alternative currencies.

If people were willing to engage in couch surfing – letting complete strangers into their houses – surely there was a potential for exchanging something as simple as one hour of a service, she says.

“Bliive is a collaborative network of time exchange,” Lorrana adds.

“We see this platform as a movement that shows people the real value of exchanges and how they can develop themselves this way.”

Bliive takes the concept of the sharing economy – popularised by platforms including Uber and Airbnb – a step further.

It creates a new channel between the supply and demand of services, and does away with conventional cash altogether.

More than 90,000 services are on offer on the website, making it larger than other barter-based sites, including Swapaskill.com, BabySitter Exchange and ChoreSwap.

It is hard to estimate how much Time Money that would be worth, as Bliive’s services vary in nature and value.

But using Maritza’s example – £30 per hour – would imply that it has helped exchange more than £2m worth of services.

All of that has occurred in a legally tax-free manner, as authorities cannot tax the barter economy.

Users such as Maritza have been able to create Time Money for themselves out of thin air. But making money for Bliive’s owners is proving more difficult.

Not all sharing economy start-ups are as lucrative as Uber or Airbnb – worth billions today.

Bliive does not sell advertising, and the service is completely free for regular users.

Most of the start-up’s funds have instead come from investors attracted by its potential.

“If I was an investor in the company today, I wouldn’t be most concerned about the lack of a clear financial model,” said Lisa Gansky, author of The Mesh: Why the Future of Business is Sharing.

“At the moment, exchanges are happening and inventory is growing, and we have seen with so many digital platforms that once there is a substantial community and/or assets in the network, there are many ways to extract value.

“LinkedIn is a very good example of this, as they provide a free service to individuals and found a way to charge professionals for a premium service.

“I wouldn’t be worried right now about how to capture value, only how to create and extend it.”

Lorrana is, however, trying to make some money by launching a paid service for corporate clients.

Companies can pay about £3 per month per worker, so that their employees exchange professional or personal services – such as training – via Bliive.

One of the start-up’s first clients is a call centre with 35,000 employees.

“Sometimes companies bring people from outside to teach things like how to speak in public. But you might have a very talented guy sitting just two tables away from you in the same firm,” she explains.

“We can connect the firm with its own talent.”

The business also recently opened an office in London, with help from the UK’s Sirius programme for innovative global ideas.

Lorrana sees potential in European markets, where more users are accustomed to the sharing economy – one survey suggests more than 30% of people in Britain have used one such service already.

She also sees opportunities in markets including Greece and Spain, where youth unemployment is high and people lack euros to pay for services.

“The no-money-involved transferences can be a great alternative to keep people developing themselves. We see a lot of people who have graduated with very nice degrees, but they don’t have jobs,” she says.

While Bliive aims to become more profitable, Lorrana is keen to retain its core values.

“We use these talents and values to create a world that is more collaborative and less competitive – more focused on the value of people, not just the value of money,” she says.