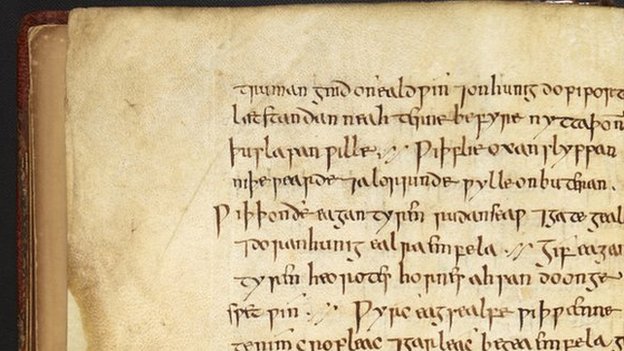 A 1,000-year-old treatment for eye infections could hold the key to killing antibiotic-resistant superbugs, experts have said.

They were “astonished” to find it almost completely wiped out staphylococcus aureus, otherwise known as MRSA.

Their findings will be presented at a national microbiology conference.

The remedy was found in Bald’s Leechbook – an old English manuscript containing instructions on various treatments held in the British Library.

Anglo-Saxon expert Dr Christina Lee, from the University of Nottingham, translated the recipe for an “eye salve”, which includes garlic, onion or leeks, wine and cow bile.

Experts from the university’s microbiology team recreated the remedy and then tested it on large cultures of MRSA.

It seems Anglo-Saxon physicians may actually have practiced something pretty close to the modern scientific method, with its emphasis on observation and experimentation.

Bald’s Leechbook could hold some important lessons for our modern day battle with anti-microbial resistance.

In each case, they tested the individual ingredients against the bacteria, as well as the remedy and a control solution.

They found the remedy killed up to 90% of MRSA bacteria and believe it is the effect of the recipe rather than one single ingredient.

“But we were absolutely blown away by just how effective the combination of ingredients was,” she said.

Dr Lee said there are many similar medieval books with treatments for what appear to be bacterial infections.

She said this could suggest people were carrying out detailed scientific studies centuries before bacteria were discovered.

The team’s findings will be presented at the Annual Conference of the Society for General Microbiology, in Birmingham.

Equal amounts of garlic and another allium (onion or leek), finely chopped and crushed in a mortar for two minutes.

Dissolve bovine salts in distilled water, add and then keep chilled for nine days at 4C.