The History Of The Tree Of Life

Ever walk by an abandoned lot; over run by plants and wonder to yourself if there is anything useful in there?  Well the short answer is yes! For those with the eyes to see, the world is overflowing with abundance, anxiously waiting for us to take her up on the offer.  This series looks to share some of nature’s mysteries in hope to empower the individual.  The knowledge of the world around us and its infinite gifts is worth more than gold.— This is Green Gold.

The Tree Of Life // Pinus Pinaceae

We reached Stadacona today. The men are tired and the weather is getting very cold now so we decided to spend the winter here. Starting from next week we will start gathering everything necessary for our survival.

ote this in the diary. The weather is getting worse now. It is getting extremely cold. I found the locals intriguing from the 1st day I met them but now they appear even stranger to me as I can not understand how they can bear this frost only with few cloths covering their bodies.

Apparently we will spend this Christmas weeping for our dear sailors who were taken away from us. This strange illness is spreading among us. It first started between the locals and now even we are getting it. It already killed more than 50 locals and more than half of us are weak and close to the edge.

Today we had a visit from one of chief Donnacona sons. His name is Domagaya. He brought with him this local cure, ‘aneda’, that is supposed to make this mysterious illness vanish. In these times I am happy to receive any kind of help. Anything that will improve my men situation will work.

The situation has improved, it is truly a godsend.  The local cure seems to work. Out of 110 that we were, not ten were well enough to help the others, a pitiful thing to see. The evergreen ‘aneda’ is a true miracle.

Jacques Cartier had  inquired and learned from native Algonquian that a concoction made from a tree known as aneda would cure the mysterious disease; scurvy. This remedy likely saved the entire expedition from destruction, allowing 85 Frenchmen to survive the harsh Quebec winter. Many people believe the term ‘aneda’ may refer to the eastern white cedar, due to its high levels of vitamin C……but there was another Jacques who wasn’t afraid to explore. 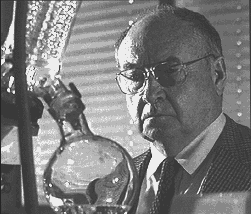 In 1951, French researcher Dr. Jacques Masquelier reportedly read this account in Cartier’s diary entries and began a search for the active ingredients in the tea. He was able to extract proanthocyanidins from the bark of the European coastal pine tree. He patented the process and named the compound Pycnogenol.

It is also used for preventing disorders of the heart and blood vessels, including stroke, heart disease, and varicose veins.

ALL WITH NO SIDE EFFECTS!

This is where you stick it to  Monsieur Jacques Masquelier and any other skinbag looking to hid useful information behind the veil of patents and fancy names.  Do you want to reverse ageing the process AND have a rock hard boner while doing it?? 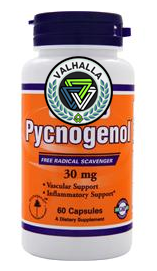 selling point……..ugh……in this one study…..these guys had problems getting boners……so they took the extract and they were able to get firm erections…. AND A PRODUCT WAS BORN ( Source )

Hope everyone understands that was a joke. Please put your wallets away, but do put your shoes on. Go outside and harvest some Pycnogenol….or should i say Pine. The point of this series is to get people the working knowledge of how they can start using the medicines that are all around us. So lets go out and harvest. 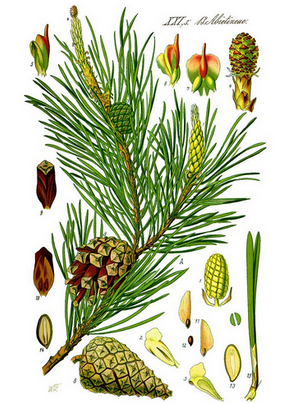 Now you might be thinking to yourself,” a pine? how am I going to tell all the Christmas trees apart?”  I promise you there is nothing hard about finding a pine in your local town, it may even be across the street on your neighbours lawn. Here is a quick way to tell a pine from other common conifers.

Look for the number of needles that come out of the same spot on a twig. If a stick bears needles in groups of two, three, or five, you can safely call it a pine. If the stick has single needles, it’s a good bet you’ve got a fir or a spruce. Take off a needle, and roll it between your fingers. If it is flat and doesn’t roll easily, it’s a fir. If the needle rolls easily between your fingers, it’s a spruce. 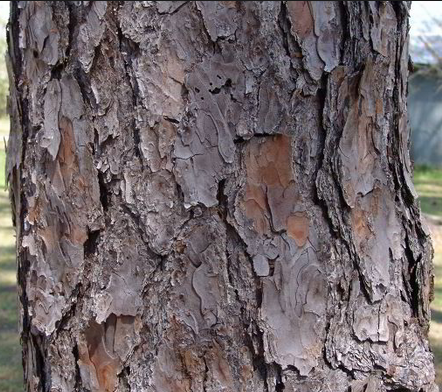 Rip off pieces of the bark, it should flake off rather easily. A single handful of bark can last up to a week. The bark can be re-steeped in hot water, keep that in mind when harvesting.

The bark can be collected year round, making it a powerful ally.  The seeds are edible, so are the needles and flowers, so be conscious while your collecting the bark. If you catch the pine at the right time you might get an added treat.

The bark should be placed in water slightly below boiling, as to not damage  too many of the chemicals. The water will turn a golden yellow color and will begin to smell and taste like the pine. Enjoy the Pycnogenol……uh…..I Mean Pine :)

Message From Germ: Hey hope i didn’t scare ya with the pycnogenol bottle hahahha. I think this series (greengold) could really empower alot of people and profoundly impact our collective future. I need your help in realizing that dream. By simply liking the GreenGold posts you are voting for more of the same.

13 thoughts on “The History Of The Tree Of Life”